Sourdough is all the rage in 2020 but what if you could make it gluten-free and without feeding a starter forever? Well, that's exactly what this recipe does. This 3-day starter with limited feeding that doesn't require a scale even creates a final sourdough bread loaf without kneading!

This bread recipe goes from start to finish with traditional healthy methods just a little bit faster without losing any of the nutritional or taste benefits. We'll make the starter, proof the dough, and then bake the final product.

I'll take you through 3 key steps

While this is a shortcut, it also makes for better gluten-free bread in my experience.

Being gluten-free actually makes this easier to make because it doesn't require any kneading like gluten-filled bread and the starter seems to be ready quicker, too!

This starter is quick because I've found that it works better this way!

After multiple times trying gluten-free starters with different ratios, flours, and durations, I find that a starter with brown rice flour works best and has the most activity early on in the process. After multiple feedings, gluten-free sourdough starters can get less bubbly aka active which can lead to flatter, duller bread.

And to be honest, it doesn't matter how long the starter is alive. It matters how active it is! That will show up in the final product by how bubbly it makes your bread and how it breaks down sometimes hard to digest proteins in the bread!

Most starters require 7 days of feeding with the expectation that over time the starter will create more and more yeast and then be more and more bubbly because of that.

However, time and time again I've seen gluten-free starters peak at day 1 or 2 and then slowly lose their bubbly activity with every feeding.

This could be because I'm doing it wrong, or because it is really hard to get a gluten-free starter to work perfectly. Either way, if it works quicker with less feeding and waste, why not take advantage of that?

Because I've found that the starter works better after just a few days, I started leaning in.

If something can be done in 3 days with 2-3 cups of flour instead of 7 days with triple the flour, why not choose the quicker and more consistently successful approach?

It also helps reduce waste by reducing the number of discards and feedings required. And, I find I feel better when I'm not making starter discard recipes and bread multiple times throughout the week.

How to make the Gluten-Free Sourdough Starter without a scale!

The start is about mixing flour and water to culture the natural yeasts on the flour. First, you mix water and flour, then let it sit, and feed it.

Mixing the Flour and Water

The first part is to mix equal parts water and flour in a mason jar until it has the consistency of pancake batter. It should be thin enough to drip but thick enough to stick together and have drops maintain their shape for a few seconds.

Choosing the right brown rice flour for your sourdough starter:

After trying millet, white rice, quinoa, and many different brands of brown rice flour there is only one that works best for this recipe: Bob's Red Mill Brown Rice Flour. I don't know why it works better than any other brown rice flour, but it does.

The second best is Arrowhead Mills Brown Rice flour, though it doesn't rise quite as well.

After mixing the flour and water together in the large mason jar, mark the height of the starter with a rubber band or sharpie mark and cover the mason jar with a dish towel.

Set the mason jar on a table in a cool space and let it sit until the starter grows.

You can tell that the start grows by comparing the height of the starter to the rubber band marker on the mason jar. After first mixing the flour, this usually takes 36-48 hours but it may take more or less time in our specific micro-climate.

When to feed the sourdough starter

You want to catch the starter after it's sunken back down.

How to feed the starter

Fort his recipe, you only need to feed the starter once. You can feed it twice if you're not quite ready to make the bread yet or if the starter hasn't risen enough.

What you're looking for in a finished starter

The starter should grow until it doubles in size. It will have lots of bubbles and increase in size.

You can tell how much the starter has grown by placing a rubber band around a mason jar after feeding as a measurement of where the starter began. Over time, the starter will grow and you can use the starter to make recipes!

You want to use the starter at full activity to make bread, which means that you have to catch it when it is at it's highest before it shrinks down again.

There are lots of recipes for starter discard. You can use the discarded starter while you are feeding or if you have leftover after making bread. As I said, I don't find that gluten free starter works as well over time and so I tend to remake a new starter with every loaf.

The key to making the sourdough bread is catching the starter at it's peak activity. That means before the starter starts to sink back down after doubling in size.

Finally, something about being gluten free that's easier!

Unlike traditional wheat bread, gluten free sourdough does not need to be kneaded. In fact, you shouldn't knead it because that will push out all of the bubbles that give it structure.

In other words, with gluten free sourdough you simply mix the flours, add the starter and water, and let the dough rise on its own.

Here's what you'll need to do:

Someone once told me that in bread making, the score is the signature. So, get creative here!

You can see all sorts of designs with a quick google image search, but my personal favorite is to add a little tree.

The important thing, is that there are two types of scoring.

This is decorative and can be larger. It will also stay in tact more than the other scores. To make this score, press a knife or scoring knife lightly into the boule in a pattern. 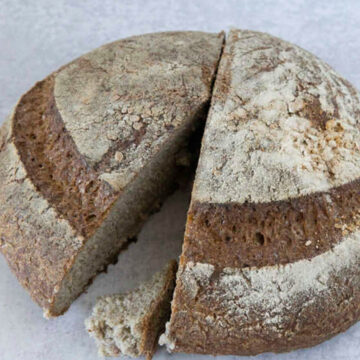 For breadmaking, use the starter at full activity aka highest poofiness. This is when it doubles in size and has not yet started to sink back down.  If at any point your starter does not have the right consistency, you can add a little more water or flour. The consistency is more important than the cup ratios.  Inspired by Homestead and Chill’s GF Starter Recipe