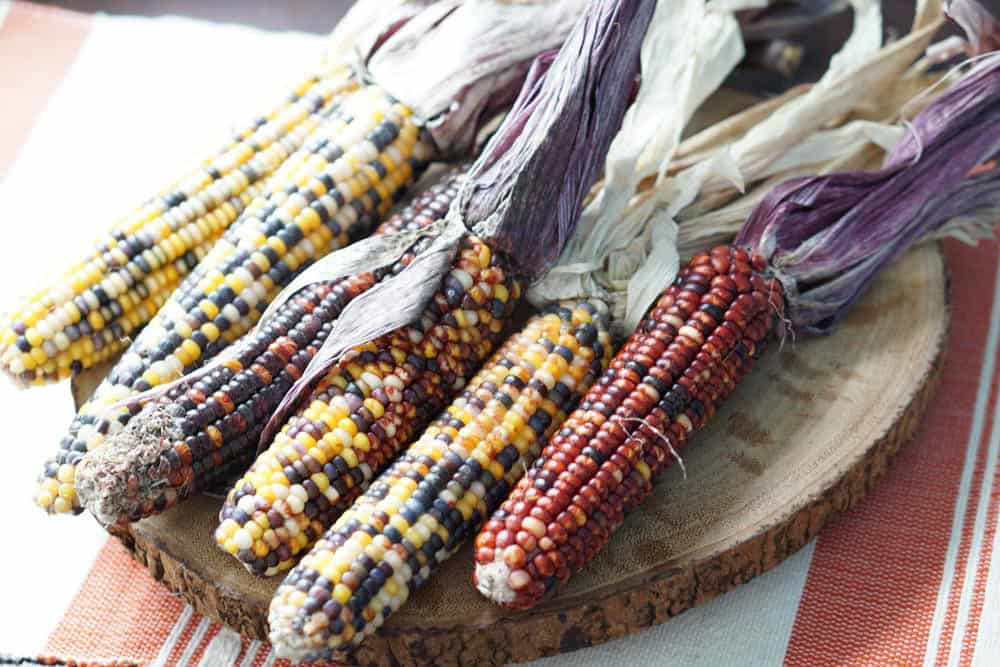 If like me after Thanksgiving you find yourself wondering: Can you eat Indian Corn? And if not, why is it on our table? Then, you’re in luck! Read how to harvest and grind that colorful decorative corn into flour, to use it as popcorn, and how it evolved into Modern Sweet Corn.

The cornucopia on our thanksgiving table always has these colorful, ornamental corn cobs. Blue, orange, yellow and black kernels poke out among the gourds, mini pumpkins and fall leaves. We never ate them as kids. They were considered ornamental, decorative.

But isn’t it weird to have food we don’t eat in the middle of the table, surrounded by food we do eat, to celebrate a day in history when people got together to share food because some of those people didn’t have enough to eat?

I thought so, too.

Last year I started using my decorative corn as it was intended: food. 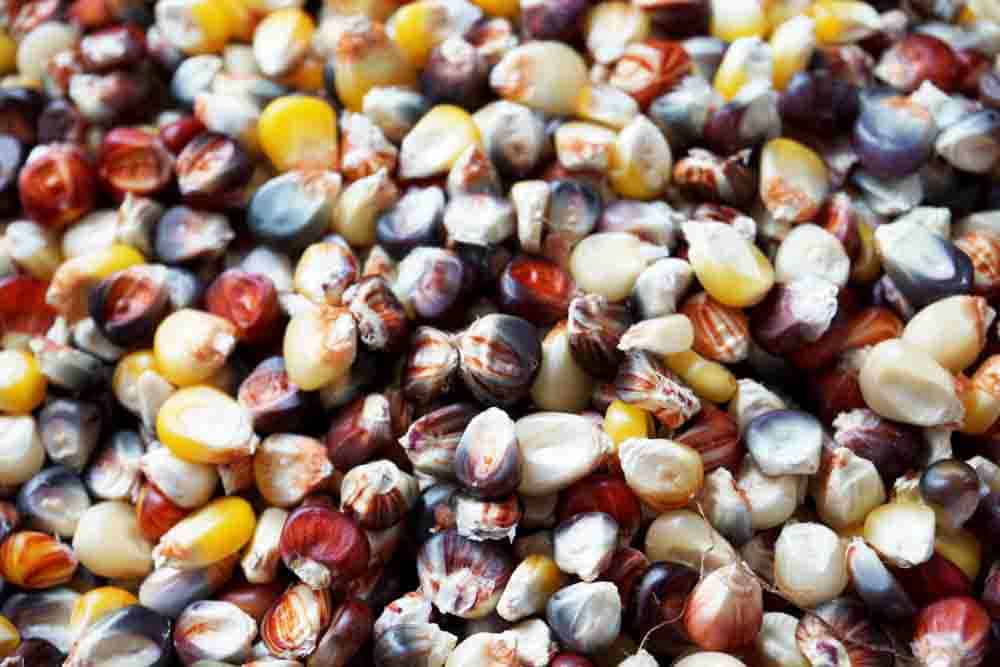 A corn by any other name

Often referred to as ornamental or decorative corn, it is also called Flint Corn, Indian corn or Calico corn. The cobs are known for being beautifully colorful and hard as flint.

We named it after the Native Americans, but it was growing in China, South America and India for centuries before we “discovered” it.  This corn is one of 3 types originally harvested by Native Americans and there’s evidence of corn cultivation as early as 1000 BC in what is now North America.

They apparently were originally one color per stalk (blue, red, white), but we bred different strains together to create one stalk with multiple colors in the last 50 years or so.

So can you eat Indian Corn?

They are indeed edible. And in fact, a lot closer to the natural corn that used to grow in the great plains than the sweet corn we see today. 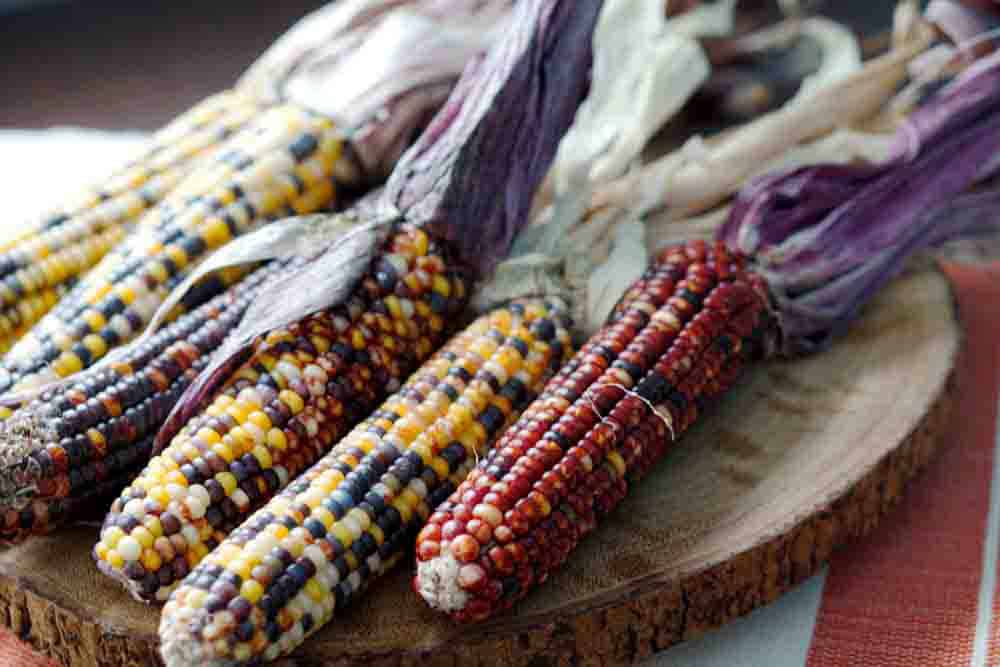 The transition to modern corn started 10,000 years ago in Central America with selective breeding, which is basically choosing the seeds of the corn you like best and replanting that next year. That artificially selects your preferred corn to be more successful. This could be corn with better texture, color, or with higher yields.

Traditional corn is harvested in late stage when the seeds are dry (dent stage) and used like a grain to make flour.

We humans transitioned from traditional corn to modern corn by selectively breeding for sweeter strands. The corn is sweeter because the sugar doesn’t convert to starch as well due to a recessive trait. Since the sugars don;t convert to starch, the corn will spoil faster. That is why modern corn is harvested before the dry stage, known as the milk stage.

You can find more nutritional information from Nutrition and You, including the ferulic acid content which can be preventative against cancer.

How to Use Indian Corn?

The corn seeds need to be chucked or “popped” from the corn cob itself. Then they can be used directly for popping or ground to make masa.

Then the masa, or corn meal, can be used for a great variety of dishes including grits, polenta, masa cakes, tamales, papusas or gorditas. Basically, anything you would use normal corn flour from the store for you can use your fresh ground Indian Masa corn for. 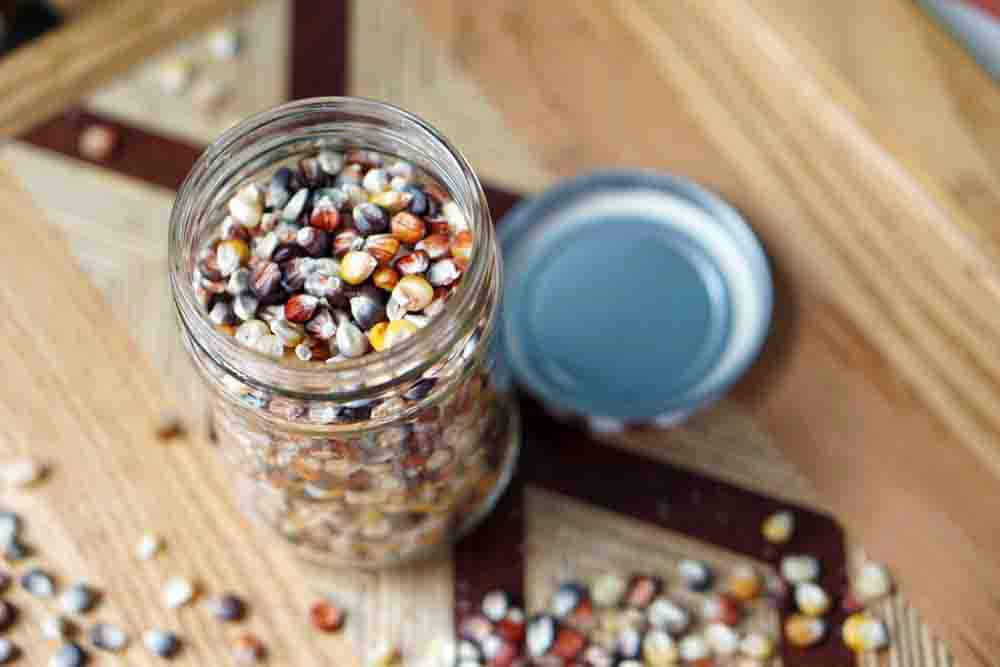 The fresh ground Indian Masa Corn is better than Masa

First, it has an earthier and richer taste. Your gorditas and masa cakes will be so much more flavorful than just buying the masa at the store.

Second, calico or indian corn is typically not GMO and there’s a smaller chance of you coming into contact with glyphosate.

How do I “Pop” the Indian Corn Kernels from their Cob?

The drier the corn, the easier this will work. When the corn dries, the kernels peel away slightly from the cob. This is their natural process so they can release the kernels to grow new corn stalks. 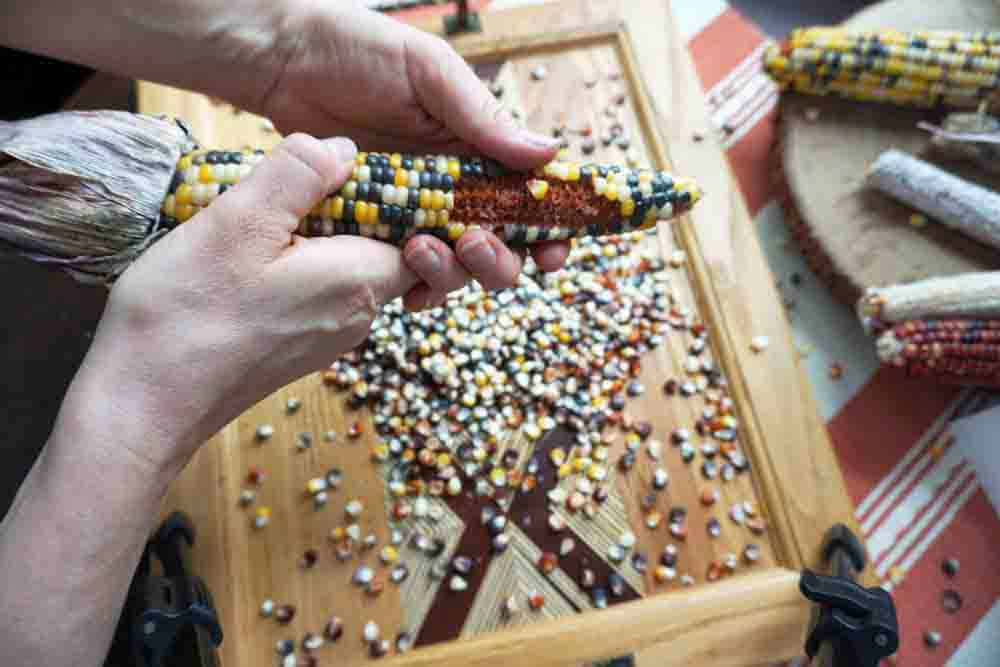 You can now make heirloom popcorn or grind your own Masa!

Here’s a short video on how to pop corn kernels out of Calico or Indian corn: 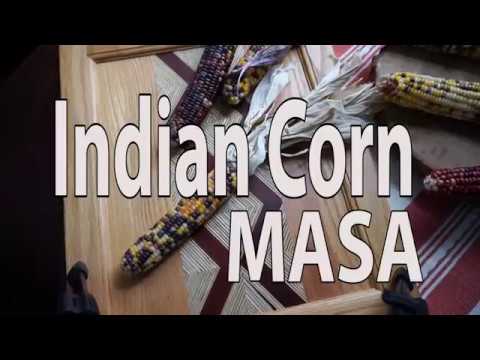 How to make popcorn with Indian Corn

Curious if popcorn is allowed on the Ketogenic Diet? Find out Here.

How do I grind the Indian Corn into flour?

You don’t need a mill. You can grind flour with what you have in your kitchen right now!

Back when my Mom and I had the bakery Grain Free Planet, we would grind our own flours. This flour grinding started out small in our kitchen before eventually growing to the point we needed a mill. We made flours out of baked white beans and black beans because the ones on the market weren’t cooked before turned into flour (which doesn’t allow the protective phyto-nutrients that give beans their names to denature into digestible pieces). 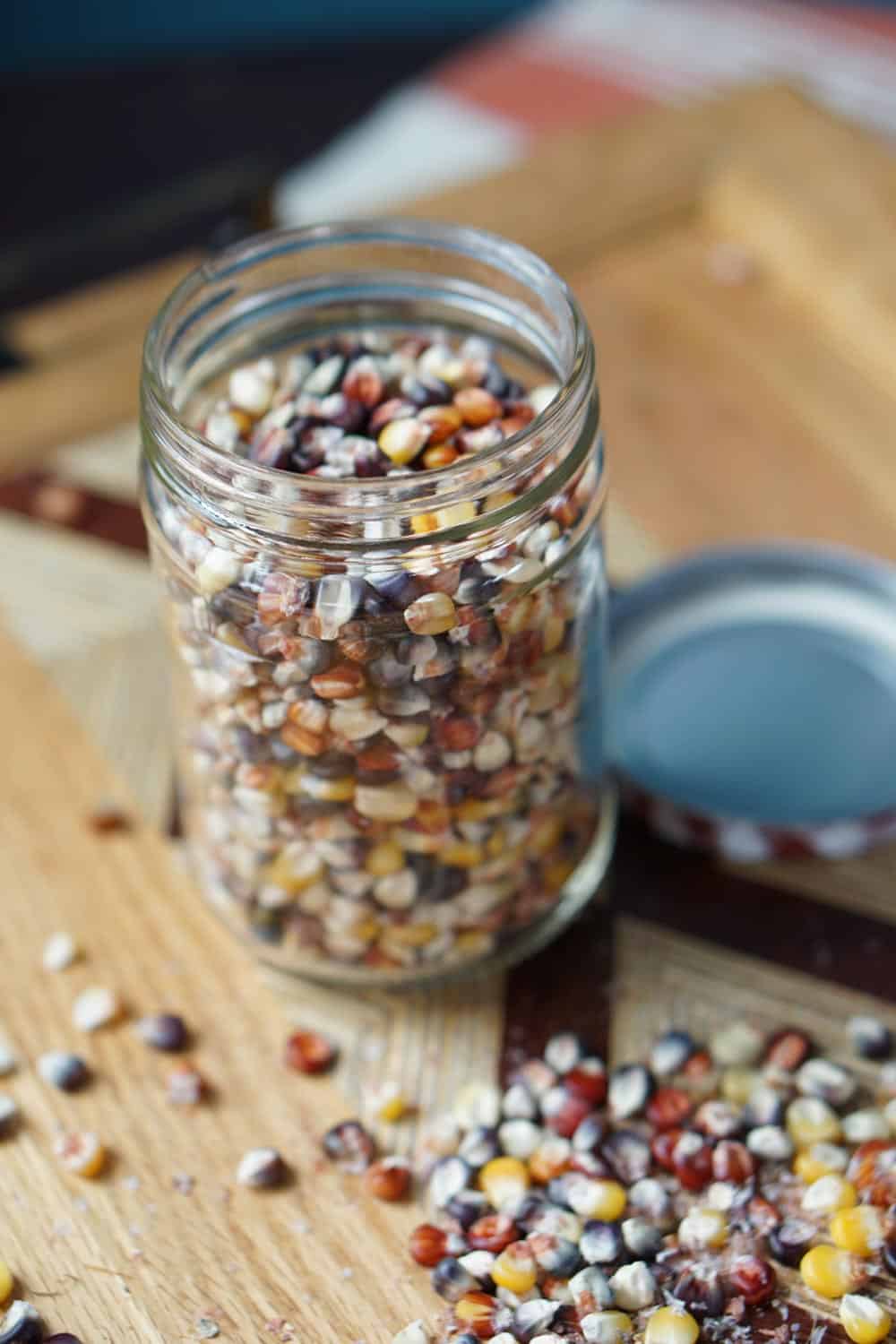 So when we were experimenting with recipe creations, we got very used to grinding our own flours at home.

The best tool for this?

You don’t need anything fancy. A standard run of the mill Coffee Grinder

will work just fine. I love to use my handy-dandy Magic Bullet Blender

, simply because it allows for more volume.

We usually would stop, mix the corn dust around, and then pulse again. This helped grind everything more evenly.  After several rotations of stirring and grinding, the corn meal is the consistency of flour. It should only take 3-5 minutes.

Doing this at home, the corn meal will be a little grittier than store-bought masa. This adds more texture to the dishes you create and won’t be a problem in the cooked product.

For Grits, do not grind the corn into a full corn meal. You want the pieces of corn kernel to be larger to get the right consistency for grits. Just pulse the corn a few times until the kernels are broken up into chunks but not into flour. The easiest way to do this is change the setting of your Coffee Grinder

to “coarse” and it will end up the consistency of grits.

If you do this a lot, Kitchen Aid makes an attachment to do this for you much quicker -> KitchenAid All Metal Grain Mill Attachment

Sharing is Caring! Pin to Pinterest for later or for your friends to find! 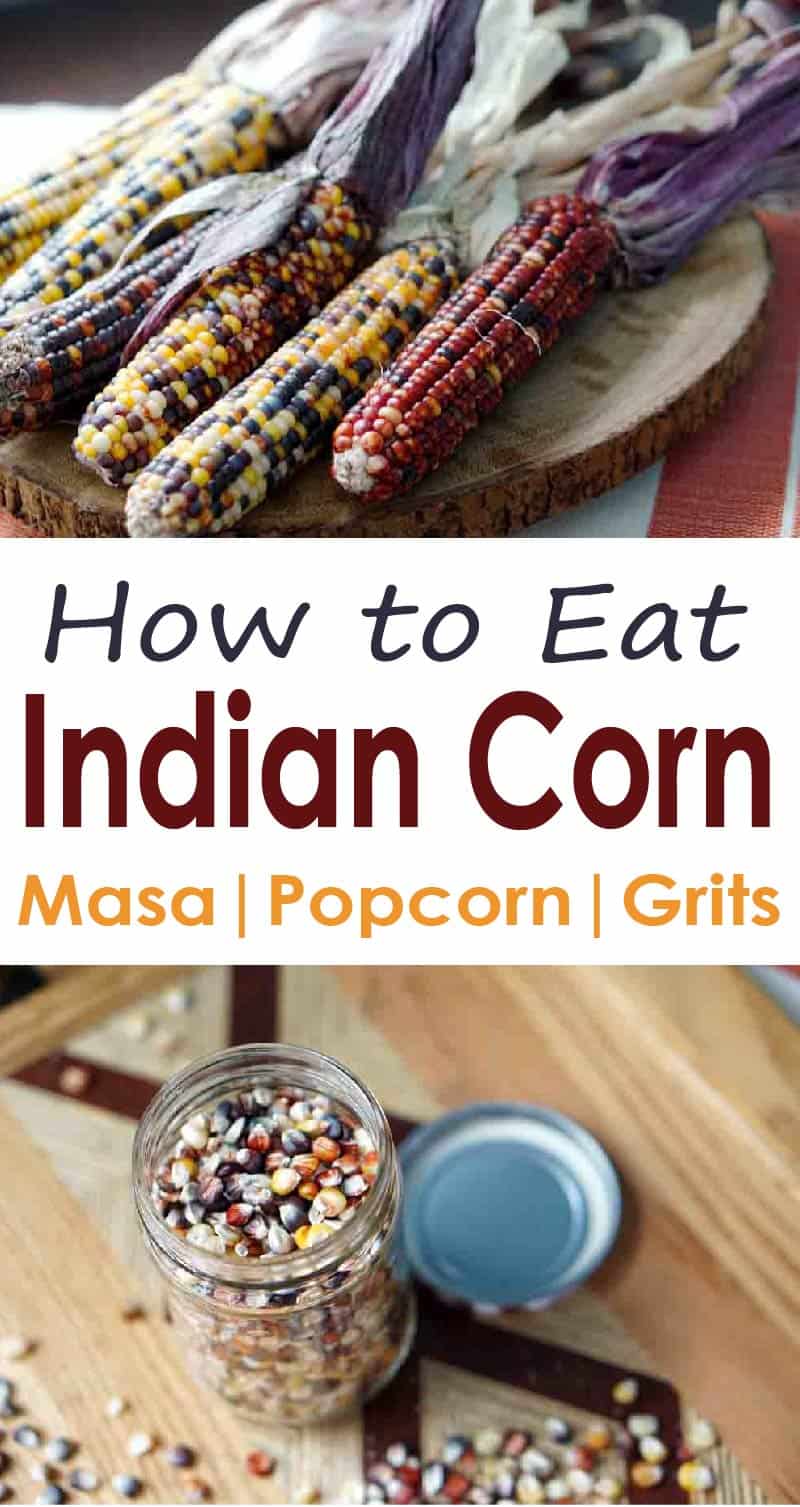 Get free guides, lifestyle tweaks & recipes emailed to your inbox.
Follow Me!
×
148 shares