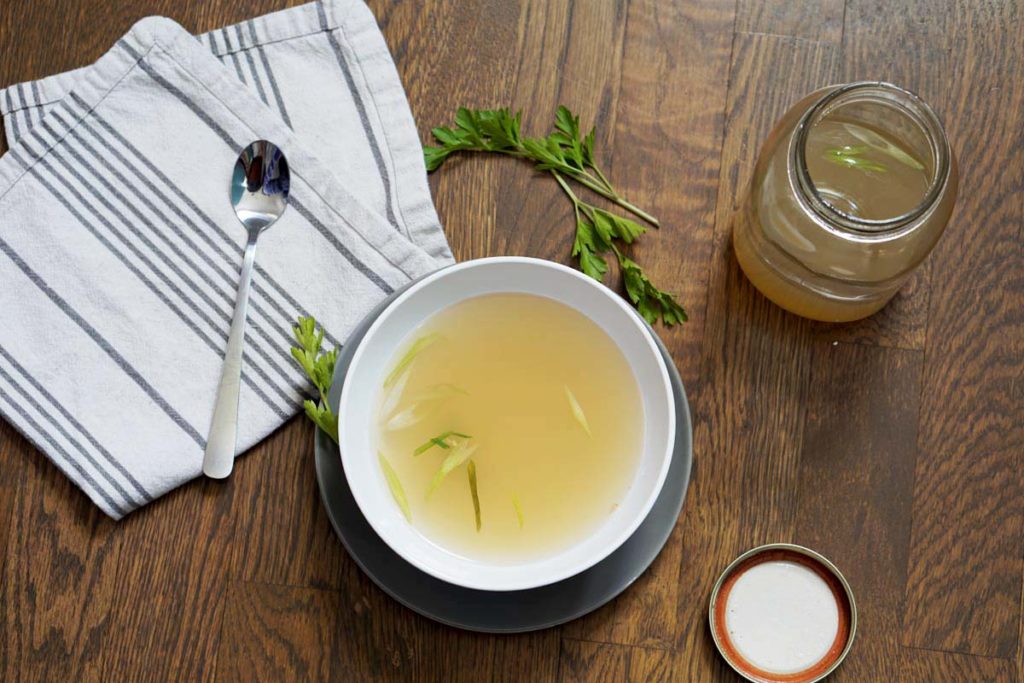 Homemade Bone Broth may seem intimidating, but it's as easy as brewing your morning tea. These 3 simple steps show how to make bone broth at home, saving you time and money and improving the nutritional value!

It sounds intimidating, right? Like something only very seasoned grandmas who have been making everything from scratch for 100 years can do.

Can you make a cup of tea? Or hot cocoa?

Then you can probably handle bone broth.

And its full of health benefits, both of the research-driven and old wives tale category. You should definitely make it. 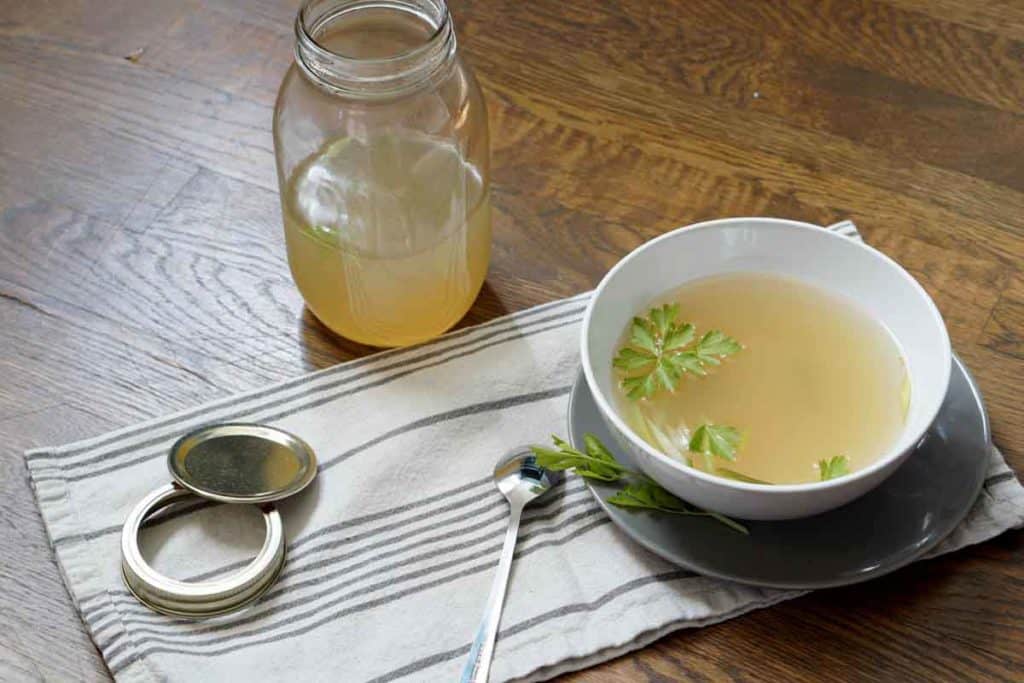 So, how is making homemade bone broth as easy as brewing tea?

Think of broth like a savory tea. Instead of spices and tea leaves, you'll season your broth with various vegetables and herbs. I usually add carrots, celery, and some herbs into the water along with the bones.

Then, it just simmers until the water is slightly colored, much like a tea.

Q: What's the difference between Broth, Bone Broth, and Stock?

A: Nothing. They are all the same. 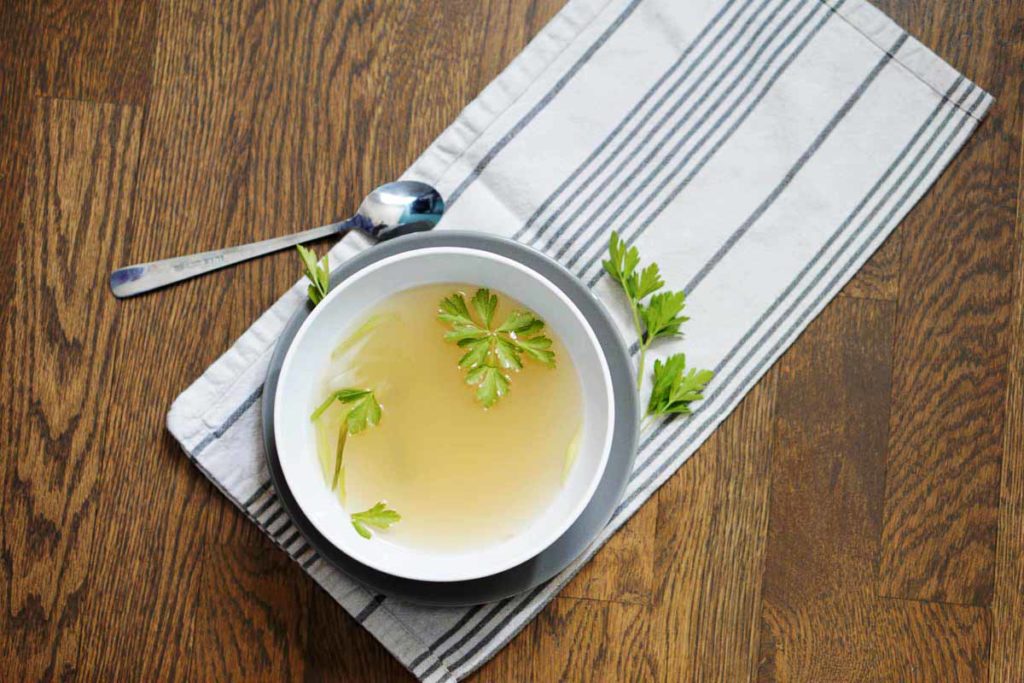 Flavoring the Bone Broth with Herbs and Vegetables

Make sure to add salt. I add it after it's cooked a bit so I can taste how much I need. It will taste a little weird without salt.

You can put anything you want in there to flavor it: garlic, onion, green onion, leek, parsnip, turnip, radish, parsley, sage, rosemary, cilantro, jalapeño, peppers etc. Try to keep it simple though, and just add a handful of things so it's not overpowered by too many conflicting flavors.

Next, just bring the water immersed vegetables, herbs and bones to a boil and reduce heat to simmer until the water is tinted or colored. The broth can also look kind of creamy.

Make sure to add salt. I add it after it's cooked a bit so I can taste how much I need. It will taste a little weird without salt.

(Side note, this is how you make veggie broth too- just use the veggies and a little extra salt :))

How to Make Bone Broth:

That's it. 3 simple steps and you have broth. 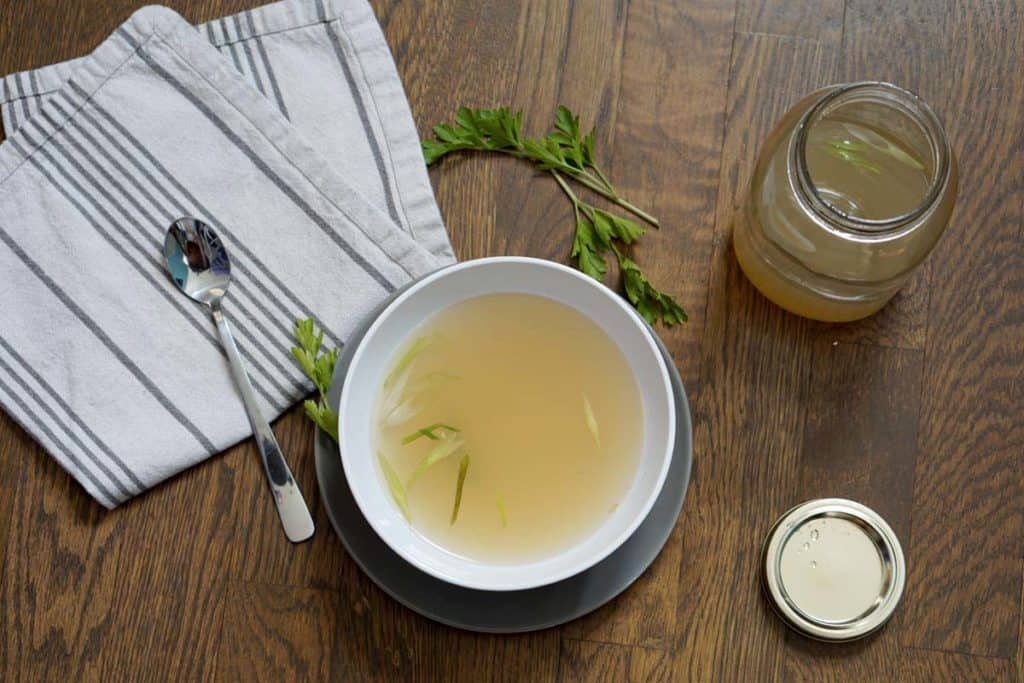 Anthony Bourdain says you should never boil broth. And if you have the time, it's best to simmer the broth (not boil it) for hours. You can let bones simmer for 7-10 hours and they will still give you good collagen.

However, I have boiled broth when in a pinch. Let's say I have 1 hour to make broth. I prefer to boil it myself than buy a processed and preserved box or can. That might me I get a little more fat out of the bones than collagen, but it still is a healthy mix of both and better than store-bought.

What would I do with homemade bone broth?

Here are some easy and nutritious recipes using bone broth 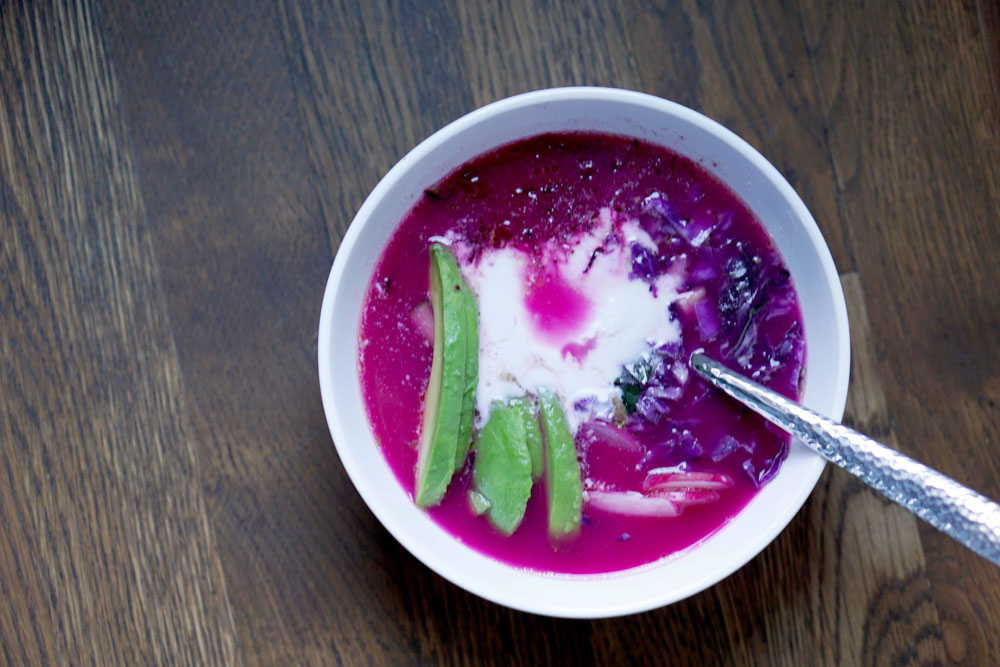 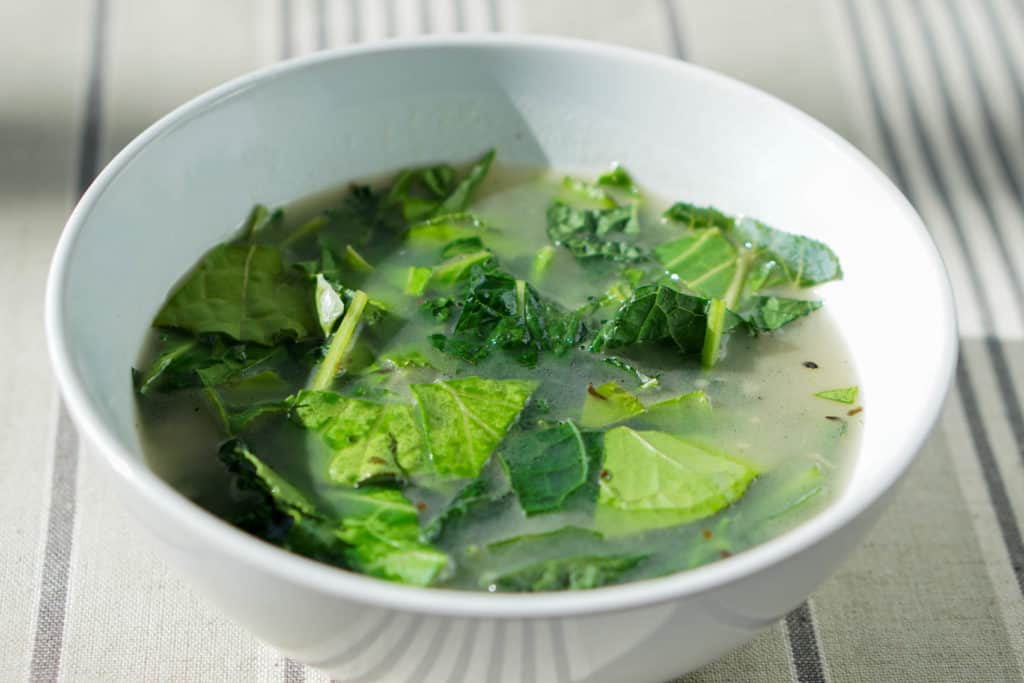 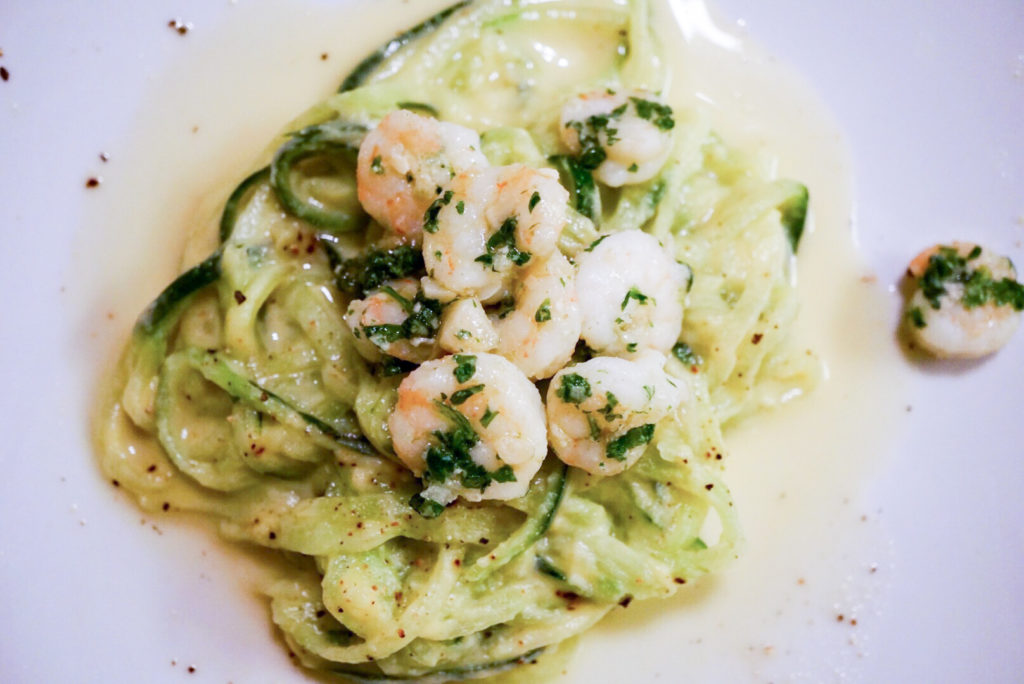 Leftovers? Or maybe too much broth? Freeze the bones for later use!

Stew bones provide a ton of broth!! With my most recent set of bison stew bones, I've made 4 batches of broth and am still getting more out of those bones.

After making few batches of broth I wanted to save the bones. I drained the broth into a mason jar for later use and then just poured the bones and leftover veggies and herbs into a ziplock bag. I put that in the freezer and they will be ready the next time I need broth.

I love doing this because when I need to make broth again, I can just dump the frozen bones in a fresh pot of water for the next round.

You can use the bones to make a surprisingly large amount of broth. Keep using them until the broth doesn't get the same richness of color and cloudiness.

Bison is one of the most flavorful bone broths I've ever made. If you can get your hands on some grass-fed bison stew bones, treasure them and the sweet nurturing broth they create.

For bison, stew bones work well. I've also saved bones from regular cuts to make broth. It's best if there is a little meat on the bones.

I love bison broth with celery, carrots, cilantro, and parsley.

They sell Beef Stew bones, but any bone will do. With beef I think, it's best if there is a little meat still on the bones when you make the broth.

For Ham Stock, use the ham hock. That's the big bone in a leg of pork or in your honey baked ham after Thanksgiving.

Think of a split pea soup when making this broth. It;s delicious with garlic, onions, carrots, celer, and sage.

For chicken, you can use leftover thigh bones. I like to mix chicken necks, backs and feet to get a real food stock 🙂 The same thing goes for the veggies and herbs.

I love cilantro and parsley loaded into my chicken stock. And in addition to the standard carrots and celery, a little jalapeno adds a great complementary kick.

Go heavy on the veggies and skip the bones. You'll have to add a little extra salt to make the veggie broth taste as savory as the meat broths. Don't go overboard though, its just a few shakes more.

When making veggie broth I add a lot more veggies. I go heavy on the fresh herbs add two carrots or celery ribs instead of one.

Want to make this later? Pin it to save it! 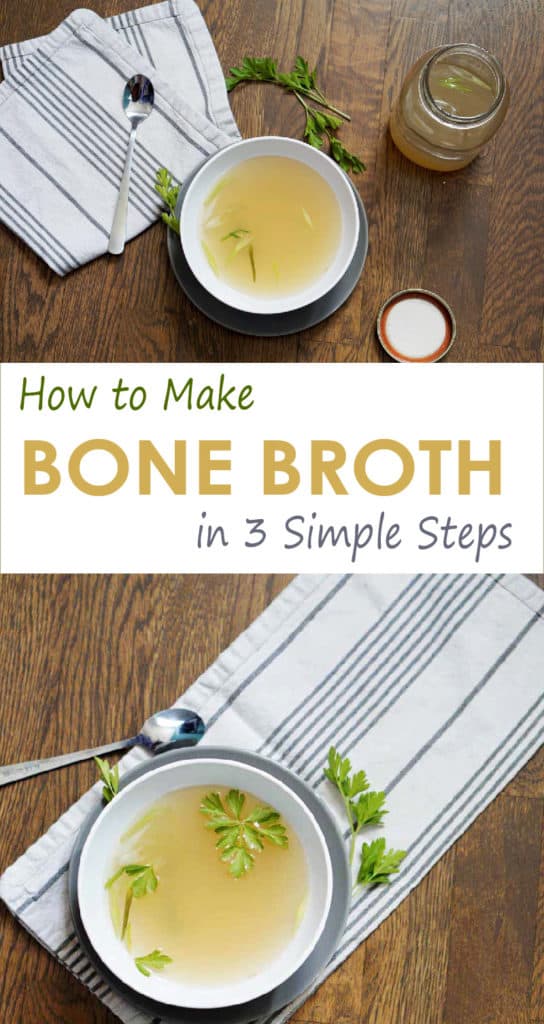 you'll also like this immune-boosting chicken and vegetable soup, which uses the drumsticks to make a nutritious and deliciously healing soup. PLenty of good glutamine in this puppy. 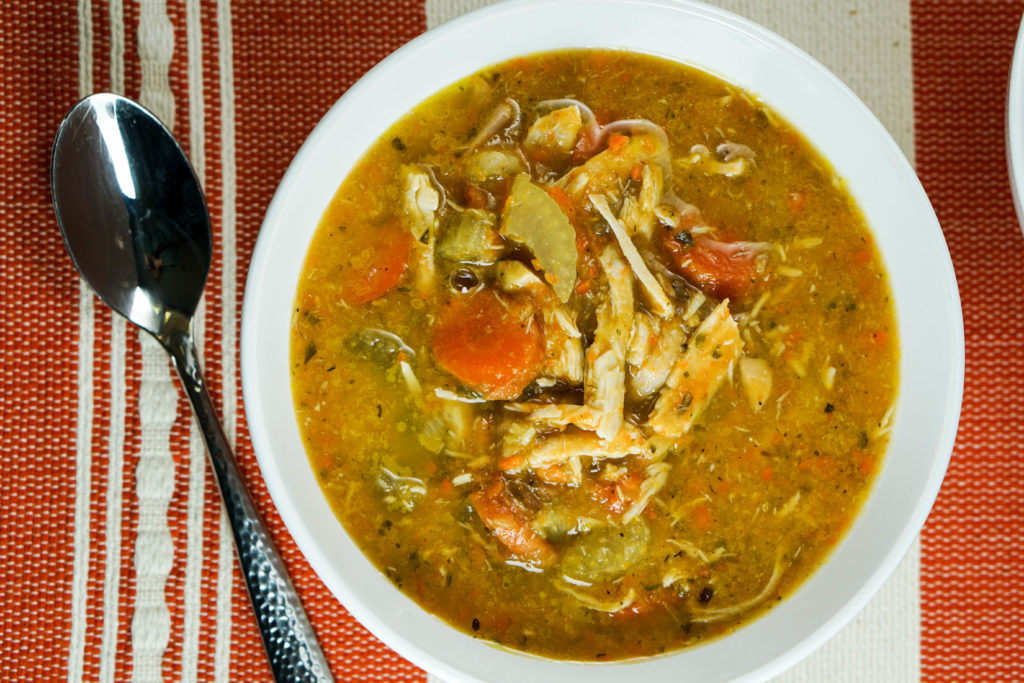