Brace yourself, you may not be able to go back to plain lemon chicken after having this delectable mix of lemon, rhubarb, herbs, broth and chicken simmered in stages until the perfect texture and flavor culminates into this delectable Rhubarb Chicken Skillet.

You'll want to make it again and again all rhubarb season!

Searing the chicken ahead of time gives a crispy texture and also allows additional flavor to go into the onions, garlic and pepper. Broth makes the entire skillet juicy and oh so saucy.

Rhubarb adds a delight tartness and lemon gives a citrus burst to balance out the healthy fats.

How to serve the Rhubarb Chicken Skillet

This dish is fantastic and tastes amazing with wilted greens and rice. The rhubarb chicken also goes well with polenta!

The key ingredients are rhubarb and chicken. Lemon adds freshness, broth makes it saucey, and the pepper gives a tad of heat, but just barely noticeable. Green onions, garlic, thyme, salt and pepper round out the flavor profile and make this dish hard to resist seconds.

Fresh rhubarb is the best for this dish but frozen will do as well. It calls for about 7 stalks which turns out to be about 4 cups of dice rhubarb.

Most rhubarb is a beautiful rosy pink, however plenty of rhubarb is completely or mostly green. This recipe was made with green rhubarb as that grows naturally here in Colorado in our garden.

This will taste and look beautiful with green rhubarb, but the rosy pink will add a delightful pink hue to the sauce!

You need to go for bone-in chicken with the skin on for the ultimate flavor and texture in this recipe. The first step is to sear the chicken in a bit of olive oil which locks in moisture and flavor into the chicken and also gives a delicious cripsy texture.

As always, it's best to choose high quality and sustainable chicken. Pasture raised chickens are the best in flavor, for the environment, and for your health.

The fresno pepper is a red pepper that look's like a red serrano and is smokier and fruitier than jalapeno or serrano.

They're named after Fresno California where they are commonly grown. The peppers have thinner walls than a jalapeno.

You can find out more about these peppers at Pepperscale.

If you can't find fresno peppers, no worries! You can use different peppers.

There are three basic steps to this chicken:

You'll start by putting a small amount of extra virgin olive oil in a cast iron skillet, just enough to coat the bottom of the skillet. Then sear the salt and peppered chicken in the hot oil for about 3-5 minutes.

Salt and pepper the other side and flip and repeat.

Both sides should be golden brown. Then remove the chicken and set aside.

You'll use the oil that seared the chicken to brown the onion, garlic, and peppers for about 30 seconds. Add the onion followed immediately by the pepper and garlic and then stir around to make sure each bit is equally cooked.

Then you add the chicken bone broth and lemon juice and let it simmer for about 2 minutes. This is to let the sauce reduce and thicken.

Also add the thyme sprigs at this point! No need to remove the herbs from the stem. The entire sprigs simmering in the liquid will flavor it. Then discard the sprigs before serving.

Then you'll add the Rhubarb!

Once you add the rhubarb, cover the skillet and let it simmer for about 5 minutes. The sauce should be boiling at this point.

Covering the skillet keeps the liquid in so the end product is nice and saucy. Only cooking for 5 minutes allows the rhubarb to maintain its shape.

Finish it all up!

Now you can add the chicken back into the sauce! Squish it down a little so the sauce is coming up around the edges of the thighs and drumsticks. However, don't push it down too much!

Top the chicken with slices from the other lemon and then salt and pepper. Add slices green opnions around the top and then cook the mixture uncovered for 5 minutes.

The final step is to broil the chicken in a non-preheated oven at 500 degrees for 5-10 minutes or until the top of the lemons and chicken is perfectly golden brown.

Garnish with a few additional green onions and serve over rice with some wilted greens!

Tips to make this more efficiently

Chop while the things are cooking

You should be able to chop the rhubarb, dice the green onion whites, mince the garlic and seed, core and mince the pepper while the chicken is cooking. Just don't forget to check on it to flip it!

Slice the green onions lengthwise while the sauce is simmering

Prepping rice or greens to go with the Rhubarb Chicken Skillet?

Start the rice right when you add the broth and lemon to the sauce. This will give you enough time for the rice to finish and be perfectly ready for your when the rhubarb chicken skillet is done.

If you are making the wilted greens to go with it, start that when the skillet is broiling as those only take few minutes. 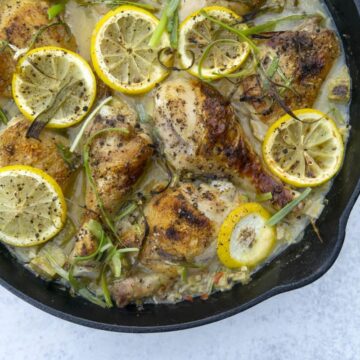 You can make this more efficiently by chopping the vegetables while the chicken is searing and slicing the green onions while the sauce simmers.