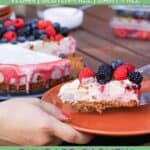 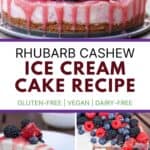 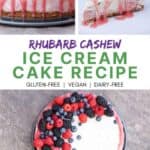 If you suffer food allergies, the words "ice cream cake" can be hard to hear. We allergy sufferers are accustomed to missing out on certain community eating situations (birthday cake, pre-dinner cheese plates, the standard hamburger and hot dog barbecue) but nothing really compares to watching all of your friends devour a delicious ice cream cake on a hot summer day. Well, the suffering is over! As long as your willing to do a little work ahead of time, that is. 🙂 This Rhubarb Cashew Ice Cream Cake is a dream for both those with and without food allergies: gluten free, dairy free, soy free, egg free, vegan, delicious and creamy. Plus, this ice cream cake is full of delicious rhubarb, mixed berries, cashews and almonds - Yum! 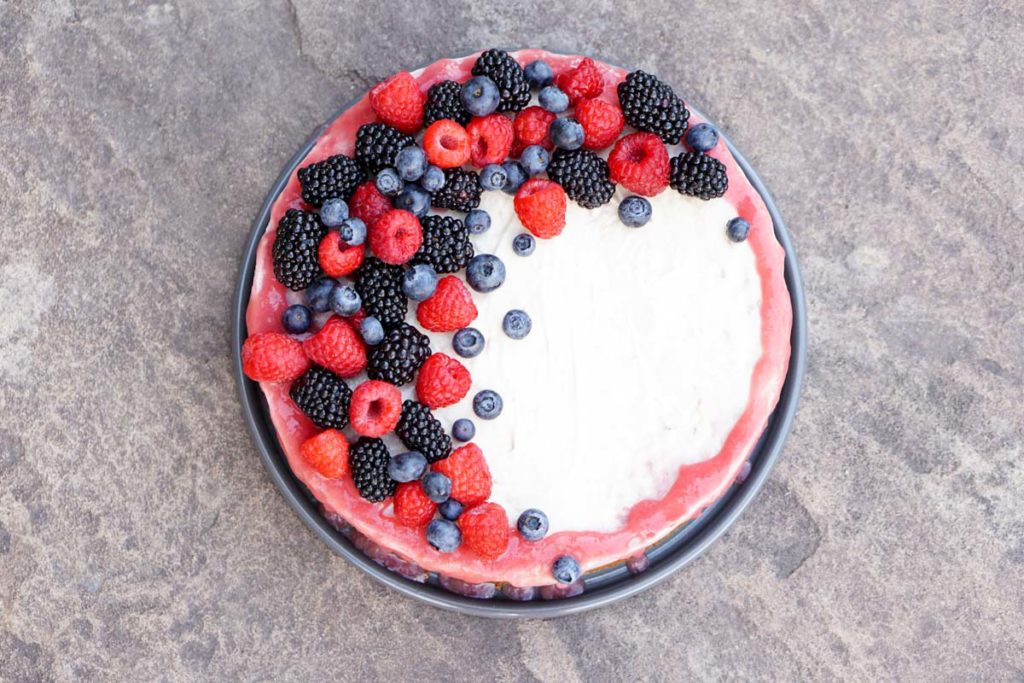 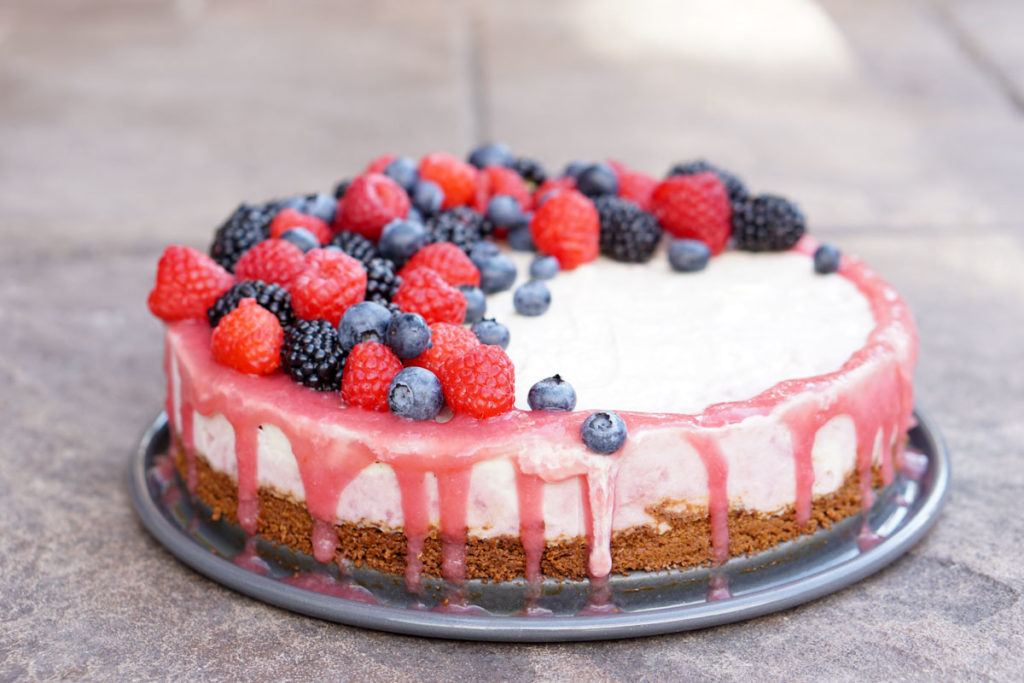 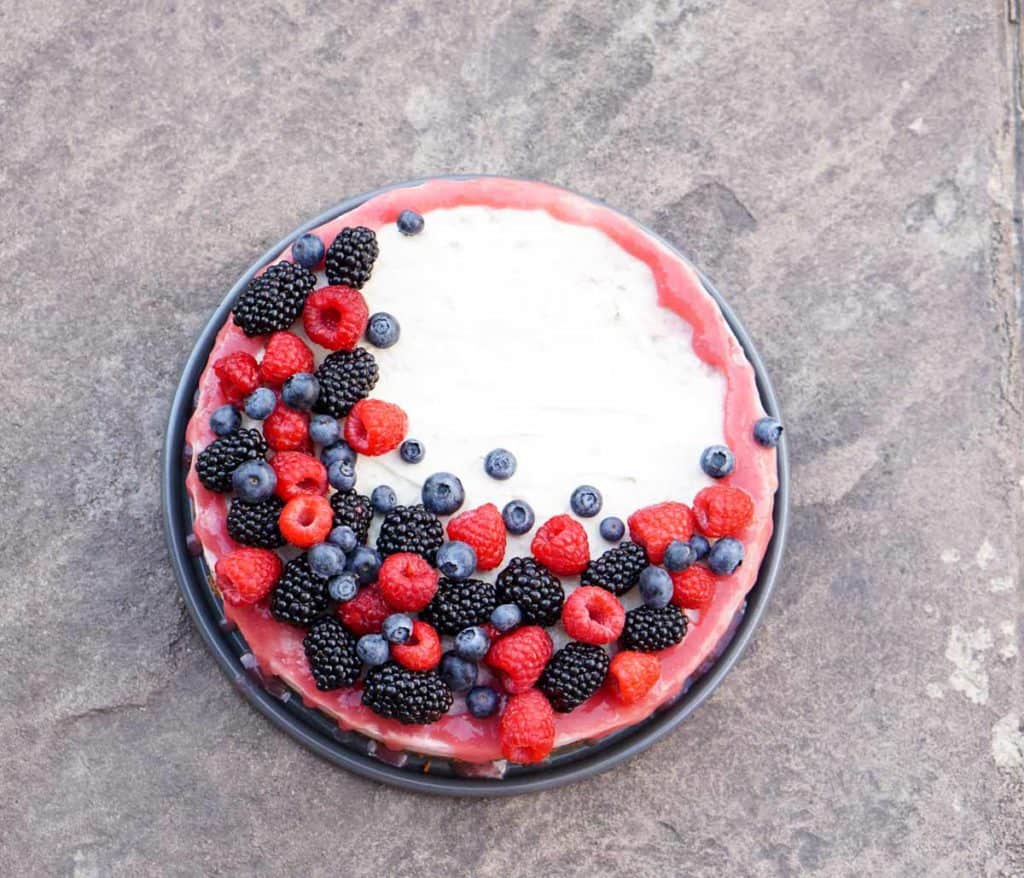 This rhubarb cashew ice cream cake was the perfect end to our summer barbecue. The heat in Denver has been intense lately and has us all craving a  little sweet frozen goodness. Plus, who doesn't enjoy a little red, white and blue in July? Am I right? (Happy Birthday, America!) Between the naturally sweetened rhubarb, the no sugar added crust and the mixed berries, it is a guilt-free treat for a barbecue. The only regret is that there weren't any leftovers! 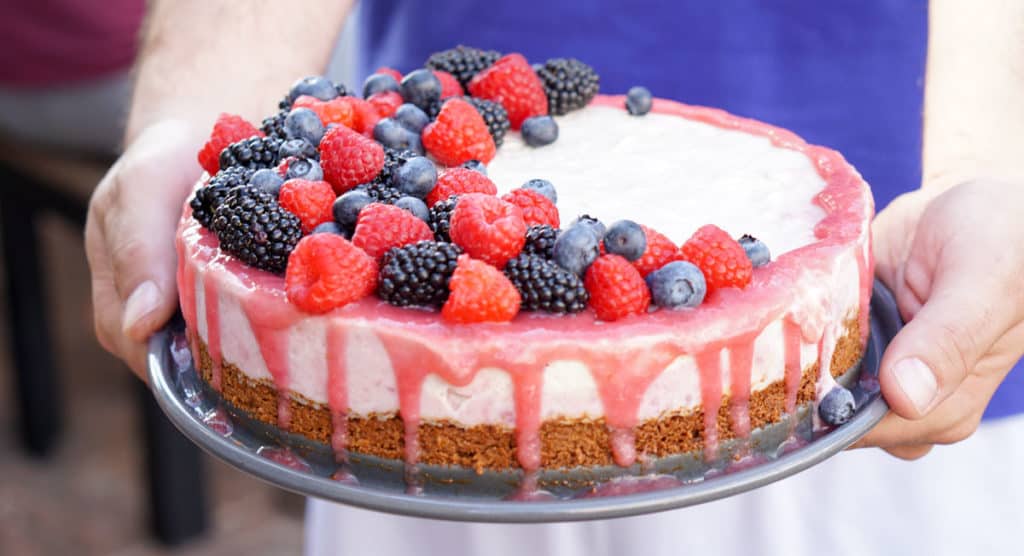 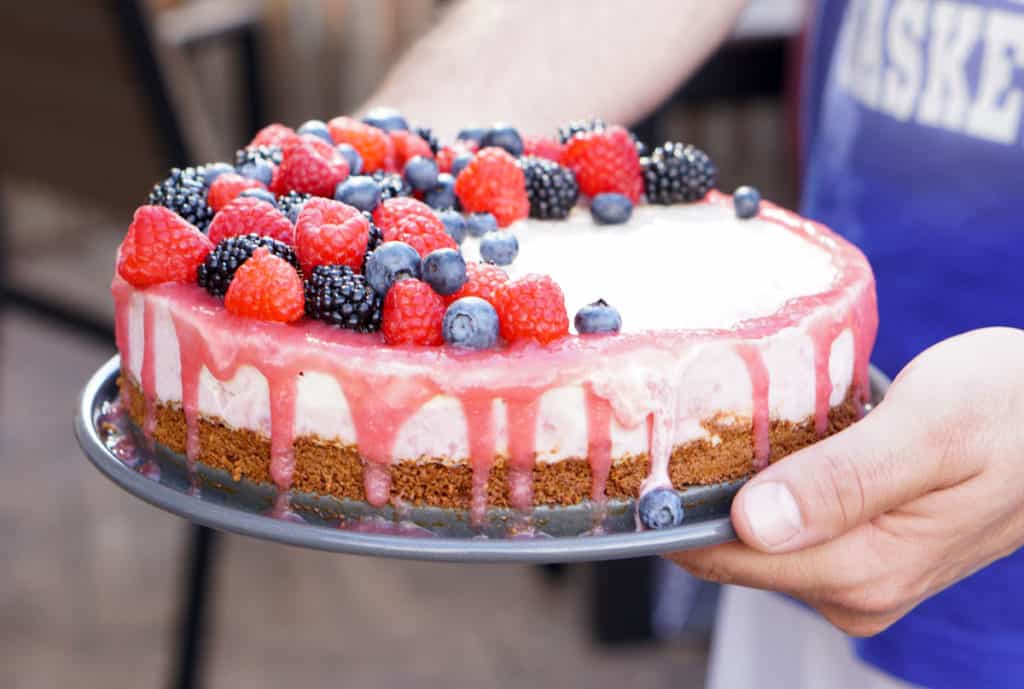 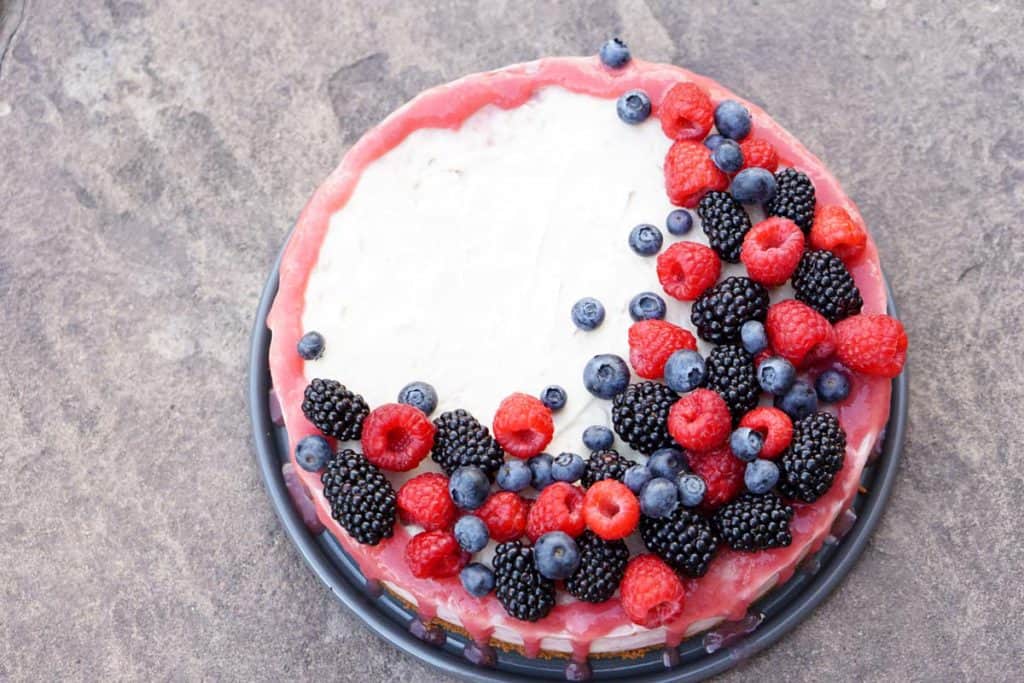 The rhubarb and apple puree also creates a delicious and naturally sweetened rhubarb reduction. The added water helps to create a texture similar to apple sauce and prevents the fruit from scorching. After cooking down the fruit, we drain the fruit creating two parts: the liquid reduction that is drained off and the fruit puree that is added to the first ice cream layer. It's important to reduce the water content of the fruit added into the ice cream. This preserves the creamy texture and reduces ice crystals. The drained juice becomes a natural syrup or reduction and this reduction is then used to garnish the finished rhubarb cashew ice cream cake. 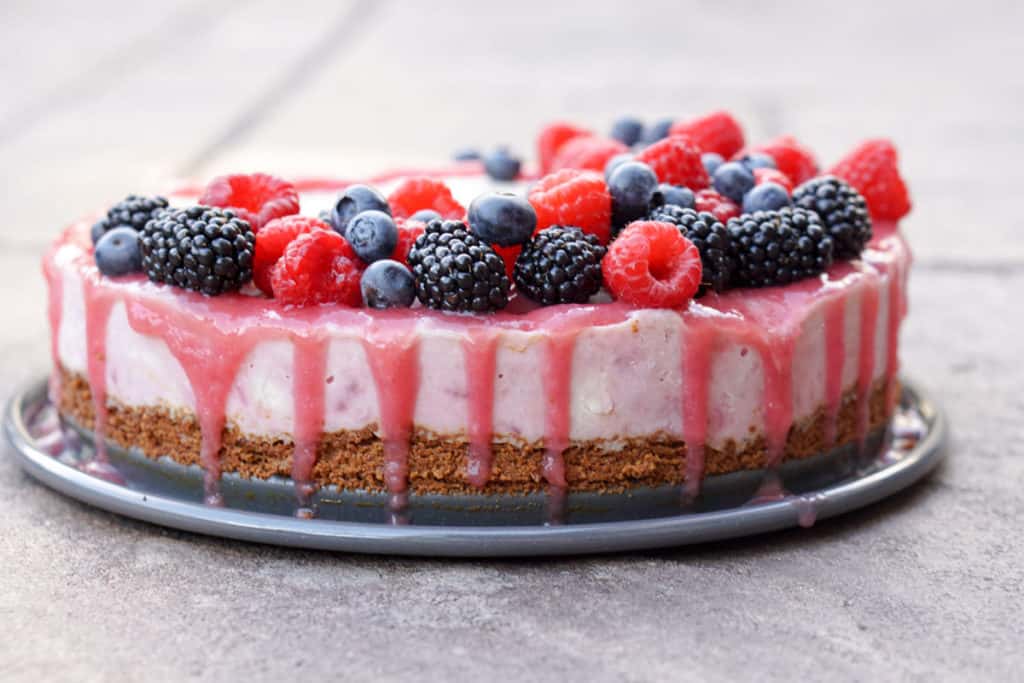 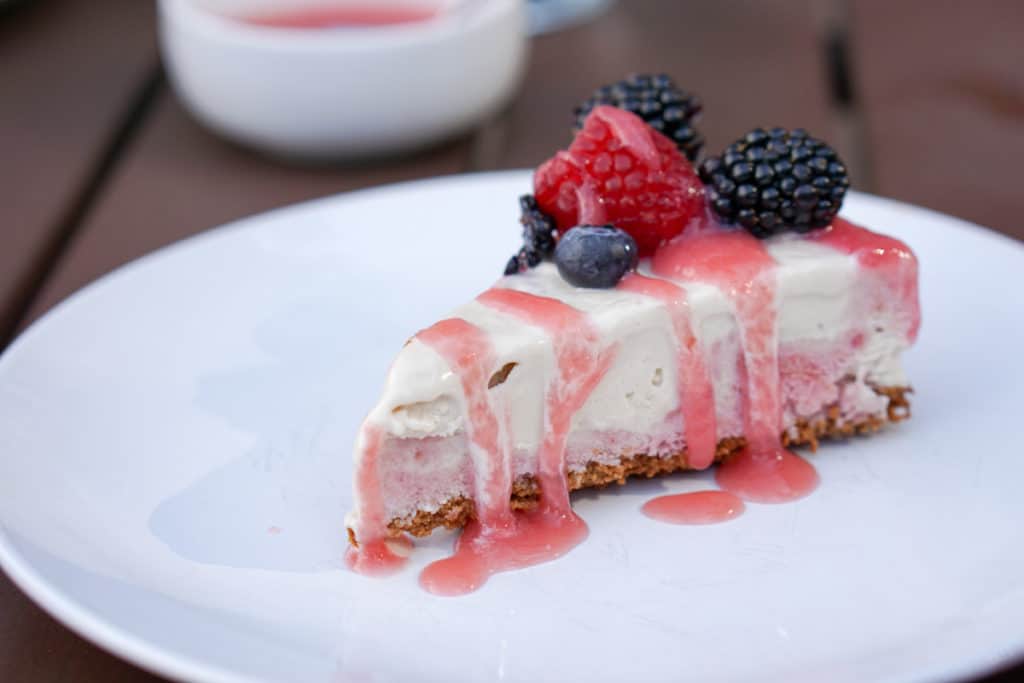 If you've made popsicles before, you might know it is easy to get an icy texture when making fruit and plant-based popsicles or ice cream. Part of the reason for this is not having enough fat content. What makes a great creamy ice cream is a combination of fat and protein with plenty of air mixed in. To make a creamy rhubarb layer we first drain excess liquid from the fruit and then add healthy coconut oil. Next we mix that rhubarb with half of the total cashew ice cream, mixing in plenty of air bubbles and evenly mixing the already creamy cashew ice cream with the rhubarb fruit mixture. The combination of drained juice, added coconut oil and mixing to add air lead to a creamy texture for the cake. 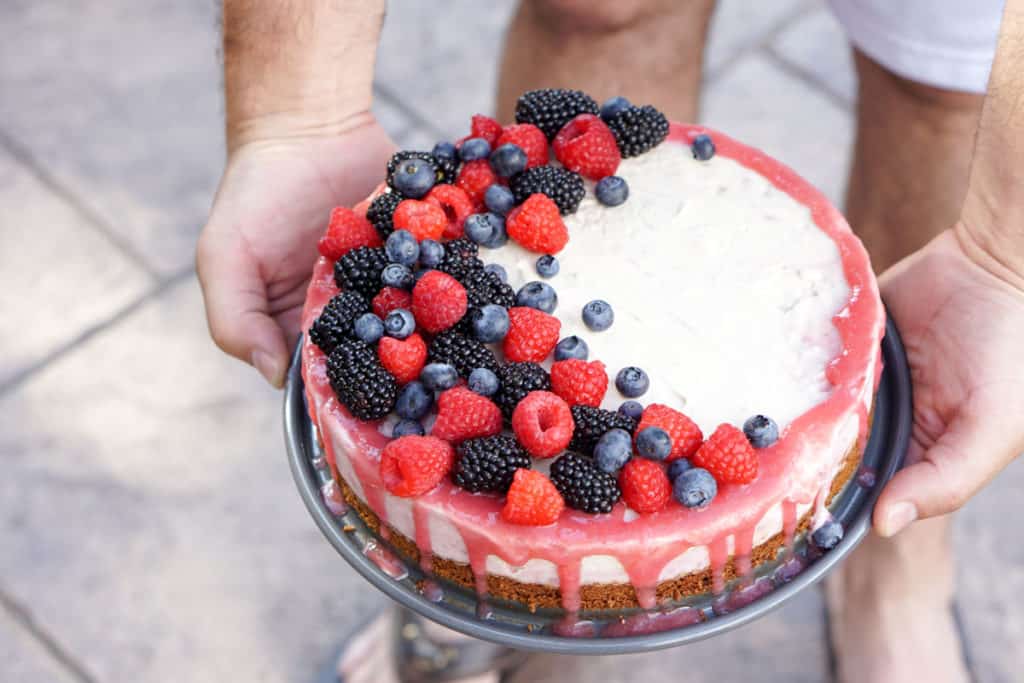 When making ice cream for an ice cream cake, you need to make sure the ice cream is nice and creamy. That allows you to cut through the cake with ease and gives that texture you expect. Similar to the gluten free industry, there are so many more options today for the dairy free community. It's nice to be able to find these alternatives in the grocery store instead of making your own, especially when you are already preparing for a full barbecue!  This Rhubarb Cashew Ice Cream Cake calls for So Delicious Creamy Cashew Cashew Milk Ice Cream. So Delicious has become my go-to ice cream when I don't have time to make a homemade "nice cream" alternative. The cashew flavor nicely accents the rhubarb and almond flavors by increasing the nutty accent. Plus, it's super creamy! 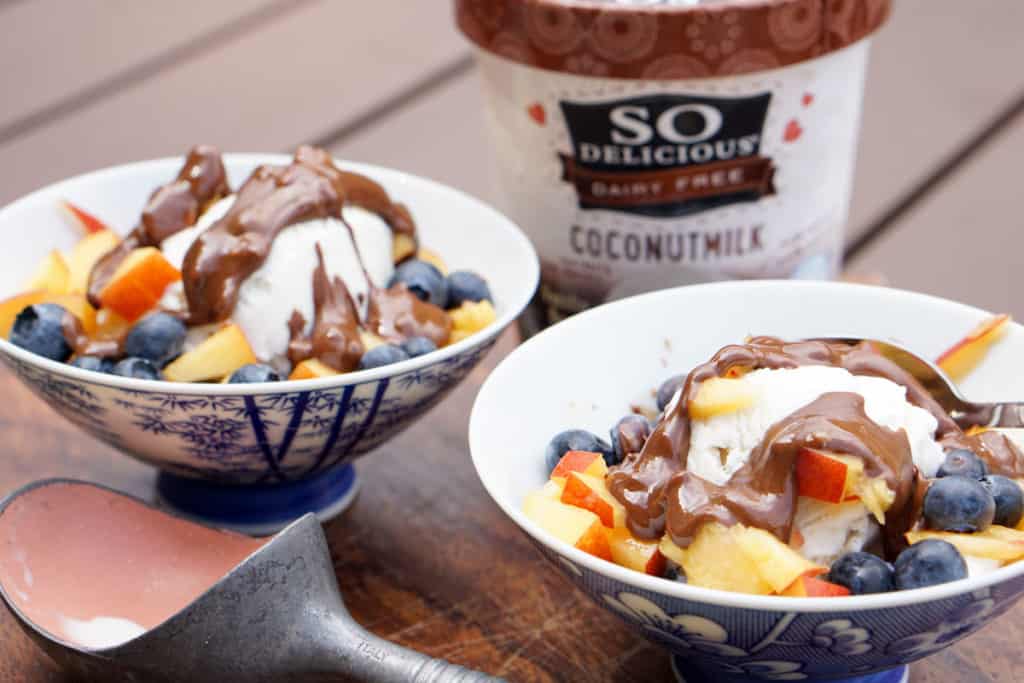 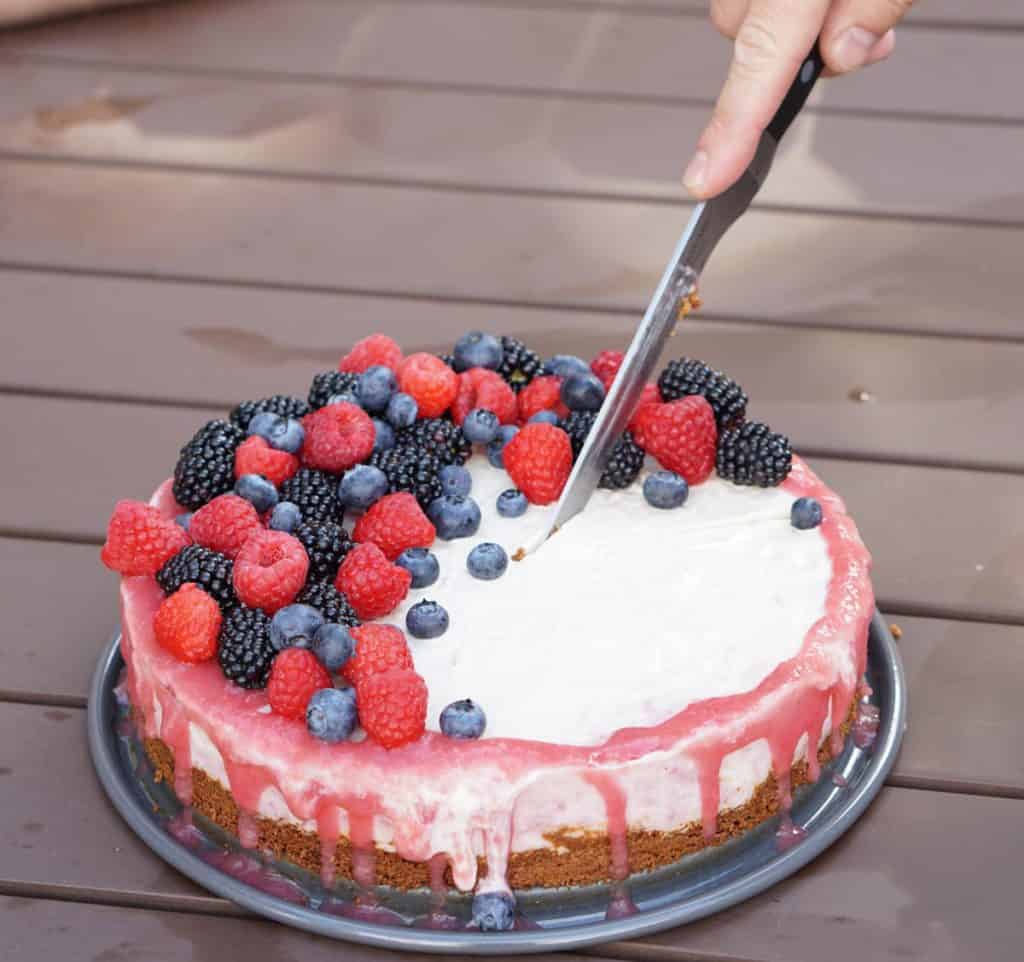 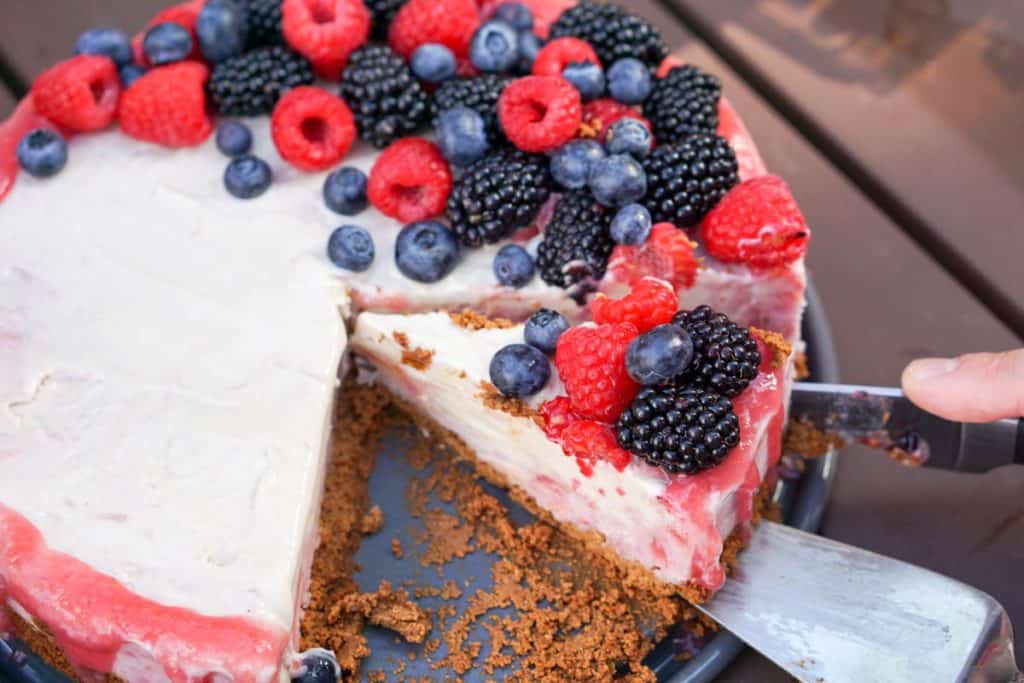 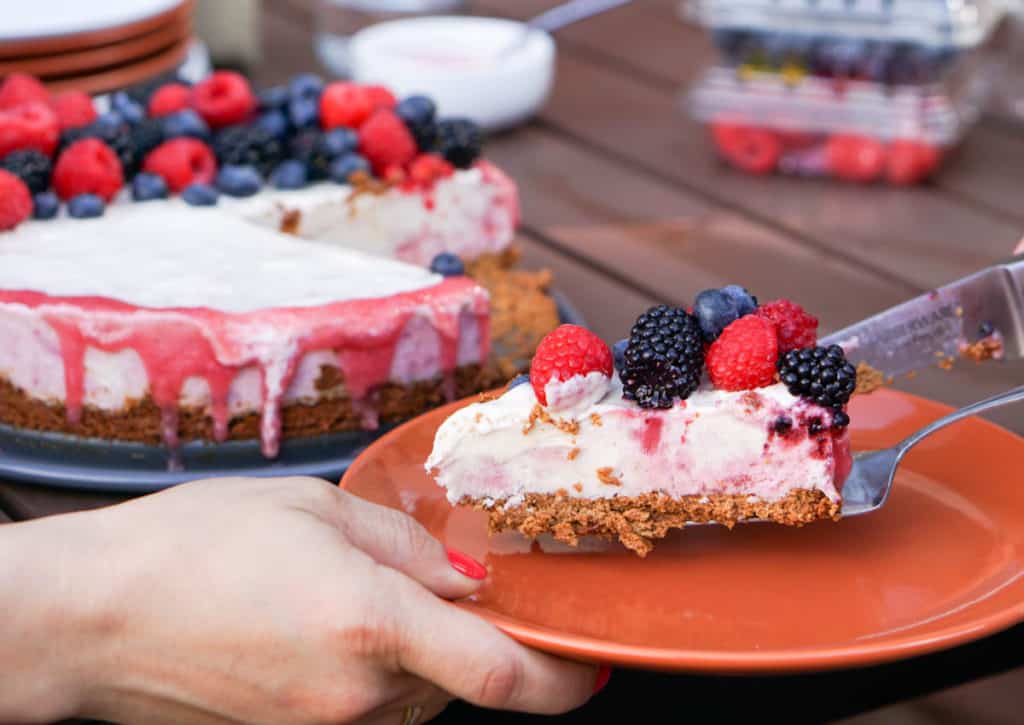 Disclosure:  So Delicious provided product for this recipe. All opinions are my own and I only write about products I use.

The crust is just as important as the ice cream when creating an ice cream cake. The earthy and natural flavors in this almond based crust accent the earthy fruit essence and the cashew flavored ice cream. My favorite thing about this recipe is it is simple. You mix lemon juice, olive oil, almond flour, almond butter and vanilla in a bowl and bake for 9 minutes. The mini cake is fluffy and light with just a hint of natural sweetness. Since the ice cream is already sweet, we don't need a lot of sugar in the cake portion of the rhubarb cashew ice cream cake. The nutty flavor makes a great base for the creamy cashew ice cream and fruit flavors.

If you like this crust, you will love these easy single serving paleo almond lemon cakes, too! 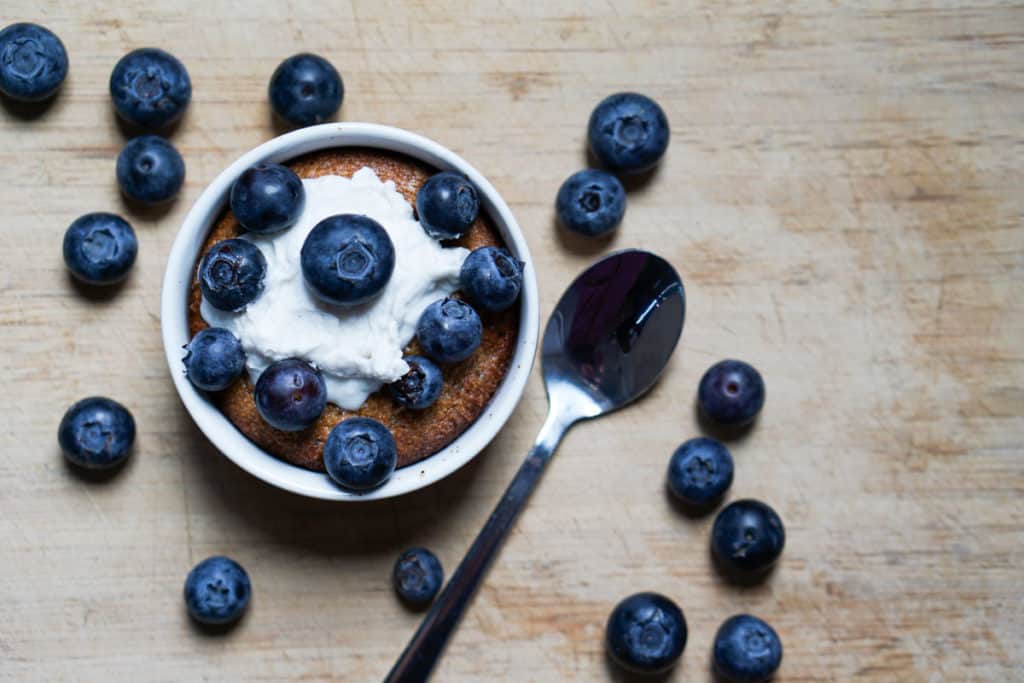 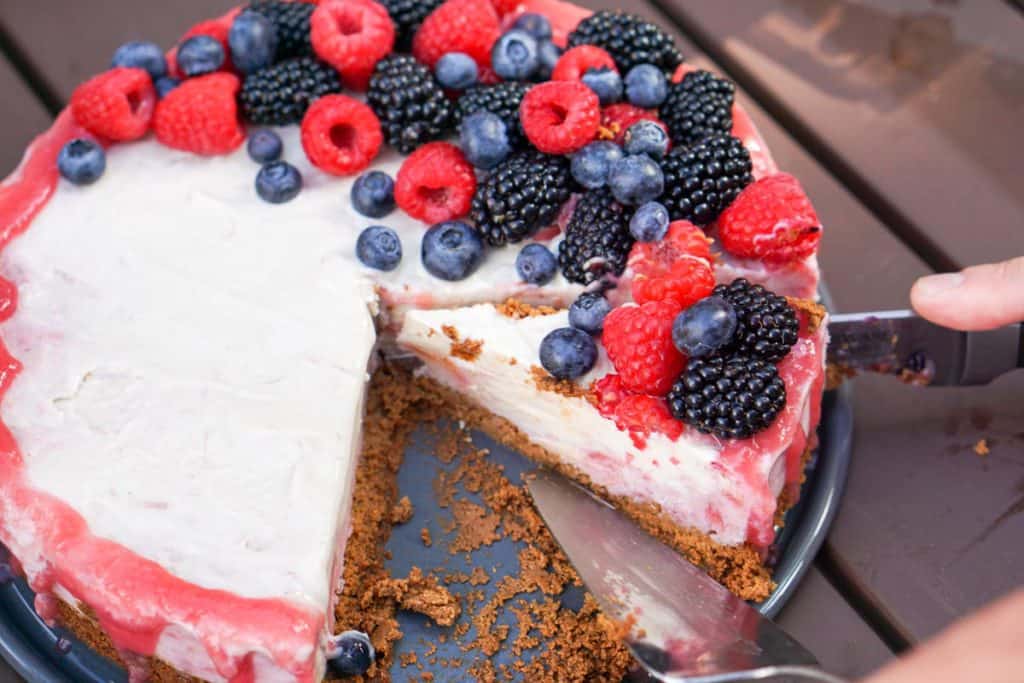 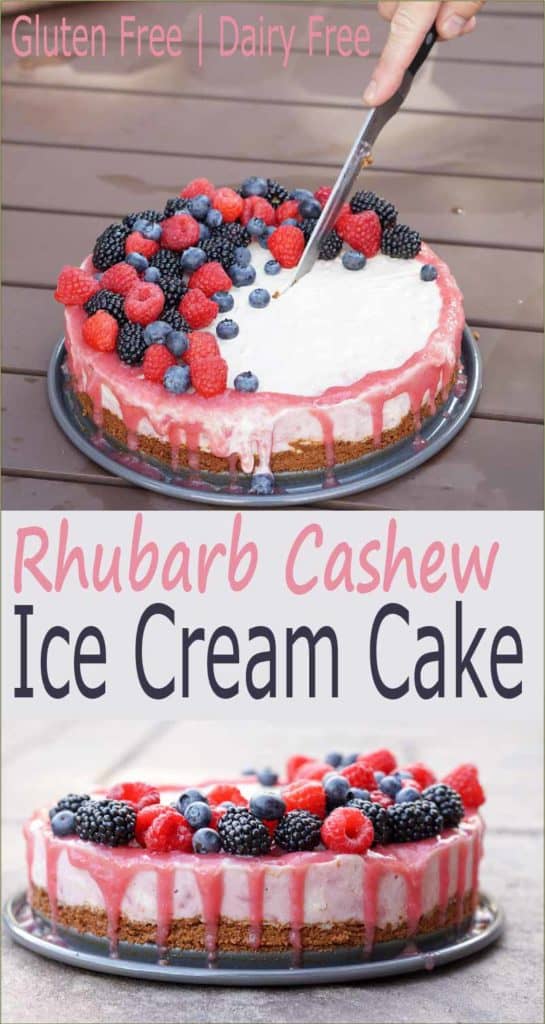 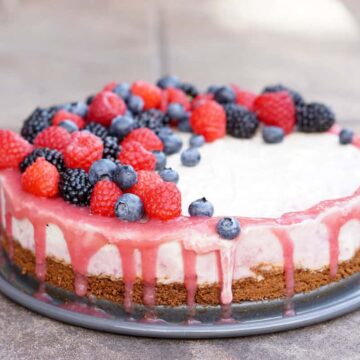