I’ve always wanted to make eggnog from scratch but was a little intimidated, especially when looking at Martha’s 3-handle spiked eggnog recipe.

Like, what a waste of booze if you mess it up!

When I finally gave it a go, I found out it was a lot easier than I would have expected to make eggnog from scratch and a lot better than the store-bought versions. This eggnog recipe is dairy-free, but it still has eggs and heavy coconut cream.

Despite that, it feels light and fluffy and oddly refreshing.

This recipe was fun and easy to make. Let me know if you take the plunge and go homemade eggnog for this year’s holiday celebration!

The History of Eggnog

What was also cool to learn is that spiked eggnog originated as a way to preserve eggs and cream from the spring and summer into the fall and winter.

The bourbon or dark rum prevents the eggs and cream from going bad.

There are 2 parts of this recipe, and they each involve a different part of the egg.

You’ll need electric beaters or a stand mixer with a whisk attachment to whip the egg whites.

A large sealable mason jar works great to store the yolk mixture or the finished eggnog.

Use a good rubber or silicone spatula to fold the whites into the egg mixture.

How to Serve Eggnog

Eggnog is, of course, best served over ice and with freshly grated nutmeg.

You can use ground nutmeg, bet there’s a tad more atmosphere and freshness when you grate it freshly. Try this nutmeg grinder. It also makes for very fancy homemade lattes every morning.

The other benefit of using full nutmeg and grinding it fresh is that full nutmeg is less likely to be sprayed with pesticides and antimicrobials in the distribution chain.

This recipe is spiked to honor the traditional recipes used to preserve foods.

The bourbon or rum was mixed with eggs and cream to prevent it from going bad and preserve those nutrients into winter in the era before refrigeration and year-round agriculture.

To stay true to the OG intent of eggnog, this eggnog recipe is also spiked.

I used 1 cup of total alcohol for the entire recipe and split it between dark rum and bourbon. I feel that the combination of the flavor profiles works best.

However, you can use all bourbon or all rum if you prefer one liquor over the other. You can also play with quantity, ranging from 1/2 cup to 1 1/2 cups of the total alcohol.

This range of alcohol should keep the eggs and coconut cream preserved for that 1-14 day range before serving.

I prefer coconut cream because my body reacts better to it and I prefer the taste. However, this recipe will work just as well with heavy cream or whipping cream instead of coconut cream. Just use the same volume.

Eggnog is meant to be fatty, rich and delicious, but I totally understand if you want to take it down a notch.

To make this lighter, you’ll want to use coconut milk instead of cream or add 1/2 coconut cream and 1/2 water.

If you are using regular dairy, opt for full fat milk instead of cream.

Prepare and store the eggnog except for the egg whites several days ahead of time. This allows the flavors to meld.

Before serving or gifting, whip the egg whites and gently fold into the yolk mixture. You want to be sure to leave as much fluff in the whipped egg whites as possible.

This makes an excellent gift! Share in Kolsch bottles or sealed mason jars.

I recommend writing a few instructions on the label

Serve with dusted nutmeg and an anise star.

This eggnog would pair excellently with this spiced cake, English toffee bars and classic Christmas cut out cookies! 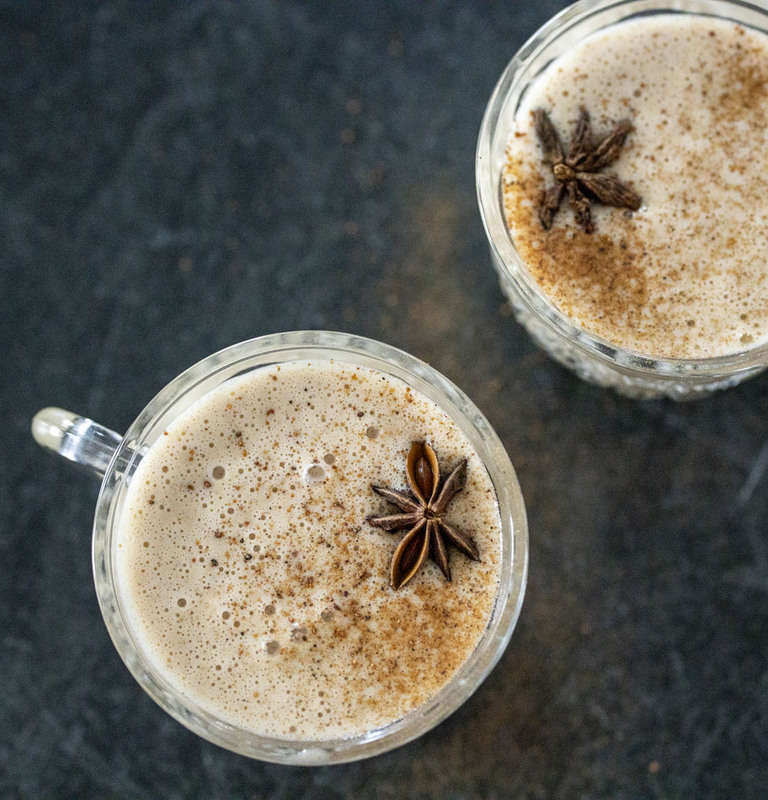 The Yolks and Booze

The Whites and Fluffiness