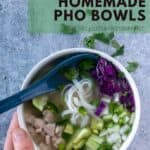 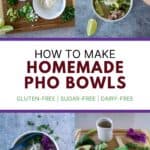 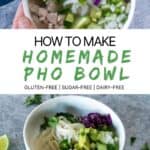 Rich and savory broth with crisp vegetables and delicious rice noodles make the most amazingly clean meal that fills the soul! It also fills the belly quick enough for a weeknight dinner. With pre-made broth, this meal can be made in under 10 minutes!

To make this healthy Pho, simply heat broth, boil rice noodles for 5 minutes, chop the veggies and add all of them to a deep soup bowl for dinner.

The most important ingredient in the Pho bowl is broth. Broth gives flavor, warmth, and nutrients to an otherwise cold bowl of veggies and noodles. Not only that, the broth is full of collagen and glutamine which can both nourish and heal the gut.

The difference between Pho and Ramen is primarily the broth. Pho is distinguished by its clear broth.

Clear broth is made by slow-simmering bones or vegetables in the water yet never letting it get to a boil. Ramen broth, on the other hand, boils which releases more fat from the bones into the broth. That's why ramen broth looks cloudier.

When making Pho broth you'll take bones and herbs and cover them in cold water in a large pot. Turn the stove to as low as possible and lightly simmer for 12-48 hours, making sure it never boils.

For this Pho broth, I used regeneratively farmed beef knuckles, celery, parsley, onion, and carrot and sea salt. After covering the ingredients with cold water, they simmered on very low heat for 2 days on the stove. You can get away with 7-12 hours but the longer it simmers the better. This can also be done in the slow cooker.

For full instructions on how to make broth, go here.

The second most important ingredients are rice noodles. Being gluten-free, noodles are not usually something that I care about. But these noodles are next level!

I have been craving them, which means these pho bowls are happening multiple times a week.

The rice noodles elevate this bowl from simple soup to Pho. Slurping those carby noodles with the broth makes all of the flavors taste just a little bit stronger. Basically, you need good rice noodles to make Pho.

As always, opt for high quality and sustainably sourced noodles for the best outcome. I use Lotus Foods Rice Noodles. They are naturally gluten-free and vegan. The company also works to support farmers and bring them out of poverty by promoting more sustainable practices that create more yield and reduce water waste.

The Vegetables and Herbs

Veggies, of course, finish it off. This Pho Bowl calls for:

This meal is very broth heavy, so you only need a small amount of each vegetable. The cabbage, bok choy, and avocado should be chopped into about quarter inch squares.

Thinly slice the peppers in slices to about 1/8 of an inch thick. This is so you don't get too much heat in any one bite.

Slice the green onions or scallions into roughly quarter-inch slices. Pluck the cilantro leaves from the stems and coarsely chop before adding to the bowl.

Use a quarter of a lime and squeeze the juice on top of the noodles and vegetables in the bowl and then include the full wedge. When you add the hot broth, the lime rind will add a deliciously complex umami flavor to the bowl.

The vegetables, broth, and noodles are the star of this meal. However, this Pho bowl is great with some diced chicken! It's also great without it if you want to skip it.

If you want the chicken, use about half of a baked chicken thigh diced into 1/4 inch cubes.

Drizzle chicken thighs with a tiny bit of olive oil, salt, and pepper in a glass baking dish. Add water so there is about 1/8 inch of liquid at the bottom of the dish. This will prevent the chicken from drying out. Salt and pepper the thighs and then bake for about 35 minutes at 350 F or until cooked through.

Add the diced chicken to the Pho bowl with the vegetables.

Making and Assembling the Pho Bowls

First things first, you need to make the broth. If you're making the broth from scratch, you will need to prepare it ahead of time. You can easily prepare the broth ahead of time and either freeze it or keep it in the refrigerator for up to a week.

If your broth is already made, simply heat it on the stovetop until piping hot but not boiling.

Next, make the rice noodles. You will need to bring salted water to a boil, stirring immediately to prevent clumping. After 5 minutes, drain the noodles and add to a large soup bowl.

Meanwhile, chop all of the vegetables. If you are adding chicken, chop the chicken at the same time as the vegetables. Add the cooked rice noodles, chopped vegetables, herbs, lime, and chicken to a large soup bowl. You'll want this to be a big bowl to have enough space for the broth.

Pour hot broth over the noodles and vegetables and eat with a ramen spoon for extra slurping and deliciousness.

Expert Tips for Making this the best Pho Bowl 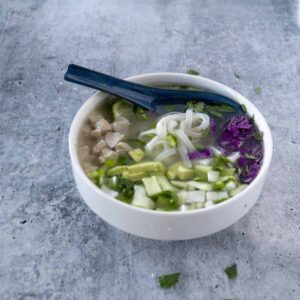