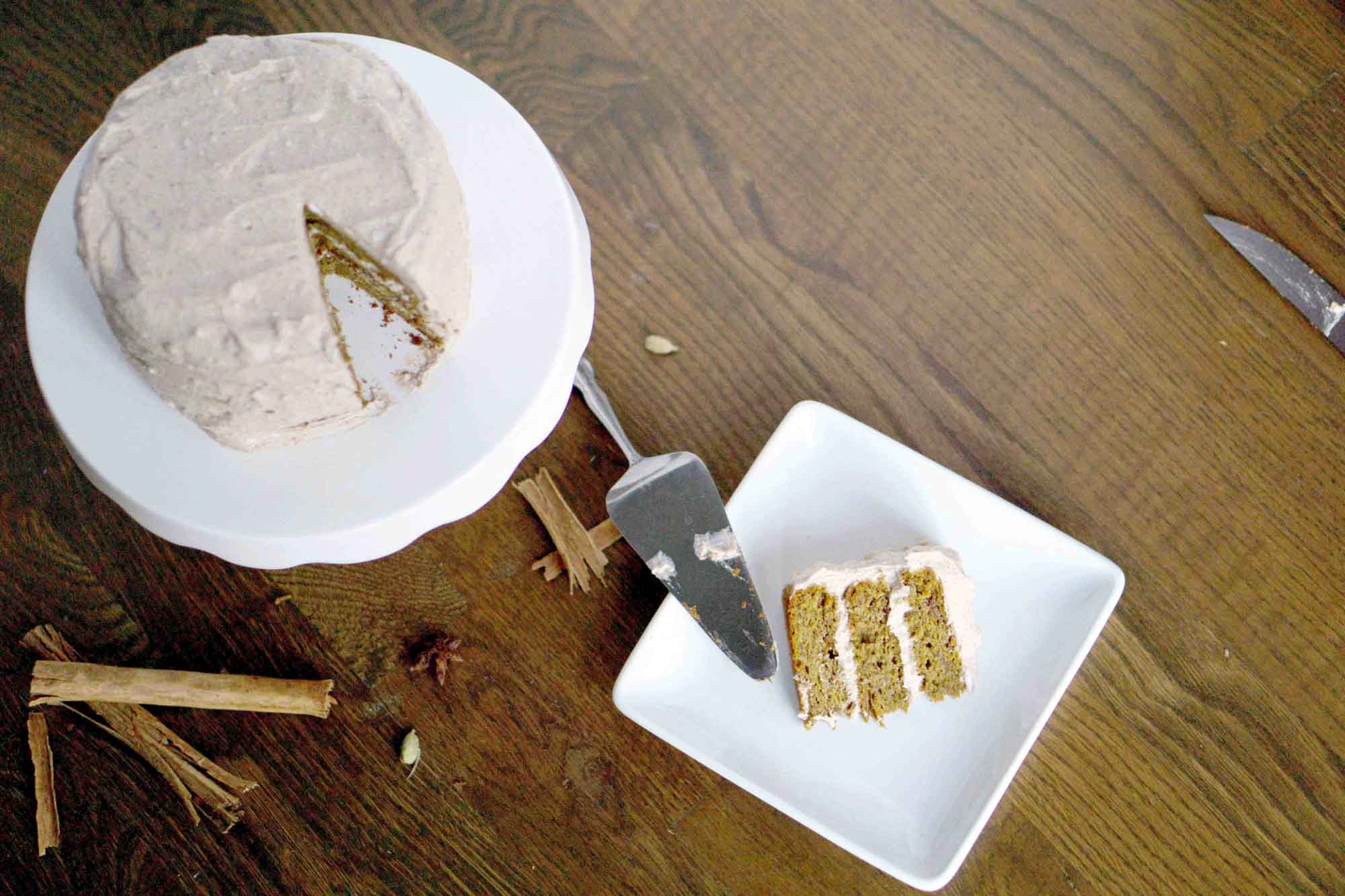 A Paleo Pumpkin Spice Cake that's light and fluffy with rich taste? Am I dreaming? Nope! This cake is a mind-blowing combo of delicious and healthy with plenty of spice for the holiday season.

I'm pretty sure I was kneading dough before I could walk… and I was definitely licking chocolate off the floor as soon as I could crawl. So baking is basically in my blood.

I learned from the best.

My mom is a pastry chef and won the very coveted seat of pie maker at our family Thanksgiving… which was a big deal. Trust me. And she also made all of our bread as kids.

I had it pretty good 🙂

Why am I telling you all of this?

We both found out we needed to be gluten free about the same time, way back in 2007. It was crushing!

But we used her pastry skills and my science background to systematically come up with new recipes that would rival the glutenous originals. Eventually, we learned to bake gluten-free cookies, brownies, pizza crusts and pies and started Grain Free Plant, a gluten free and grain free bakery.

Over the years, we transitioned to healthier and healthier recipes. Now we strive for delicious desserts baked free of grains, dairy, and refined sugars.

This recipe is a culmination of all of that and it is fricking delicious. 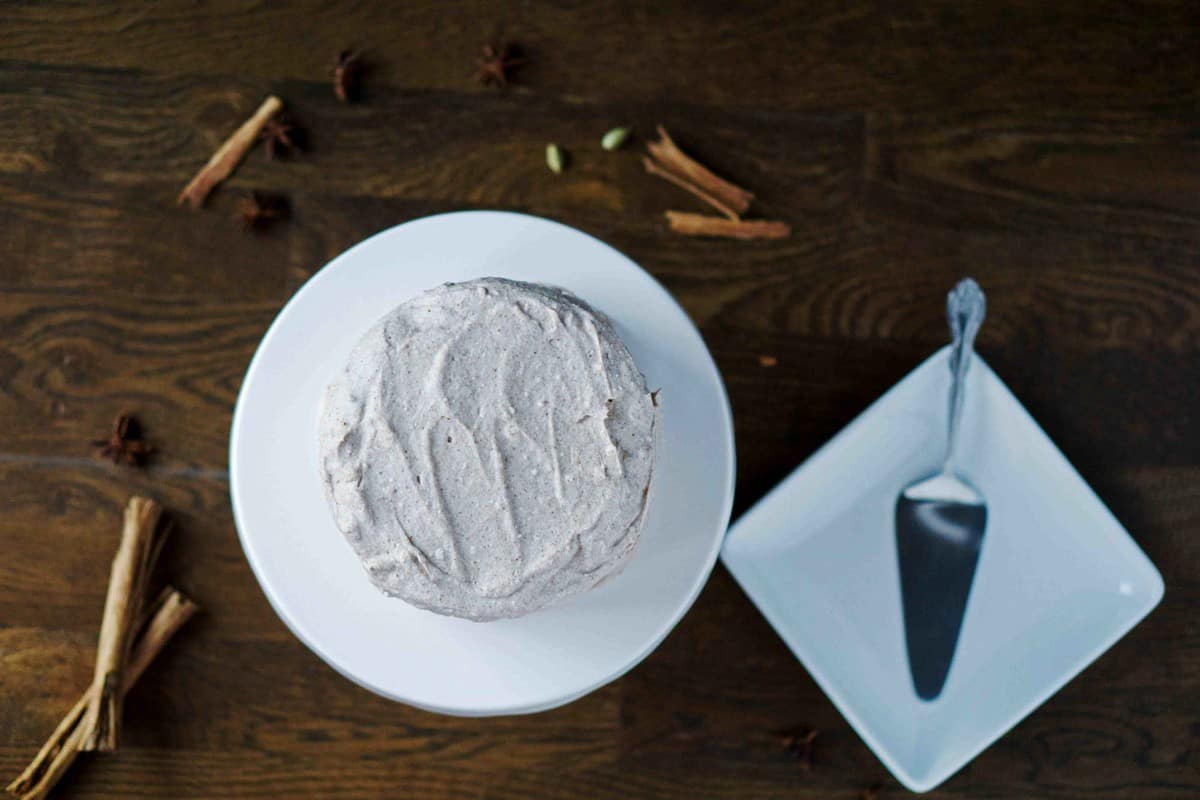 It's fluffy and light so you wouldn’t even know it was gluten free, which tends to be denser.

It's moist and flavorful thanks to the nutrient dense flours like chia and coconut. And it's naturally sweetened with dates meaning you'll get the good fiber from the dates and a smaller glycemic spike.

It's my mom's recipe and it's fabulous. She's a master pastry chef and I aspire to make baked good recipes taste as good as she does.

For now… I'll just make her recipe and share it with all of you so you too can share in the glory of light fluffy paleo pumpkin spice cakes. 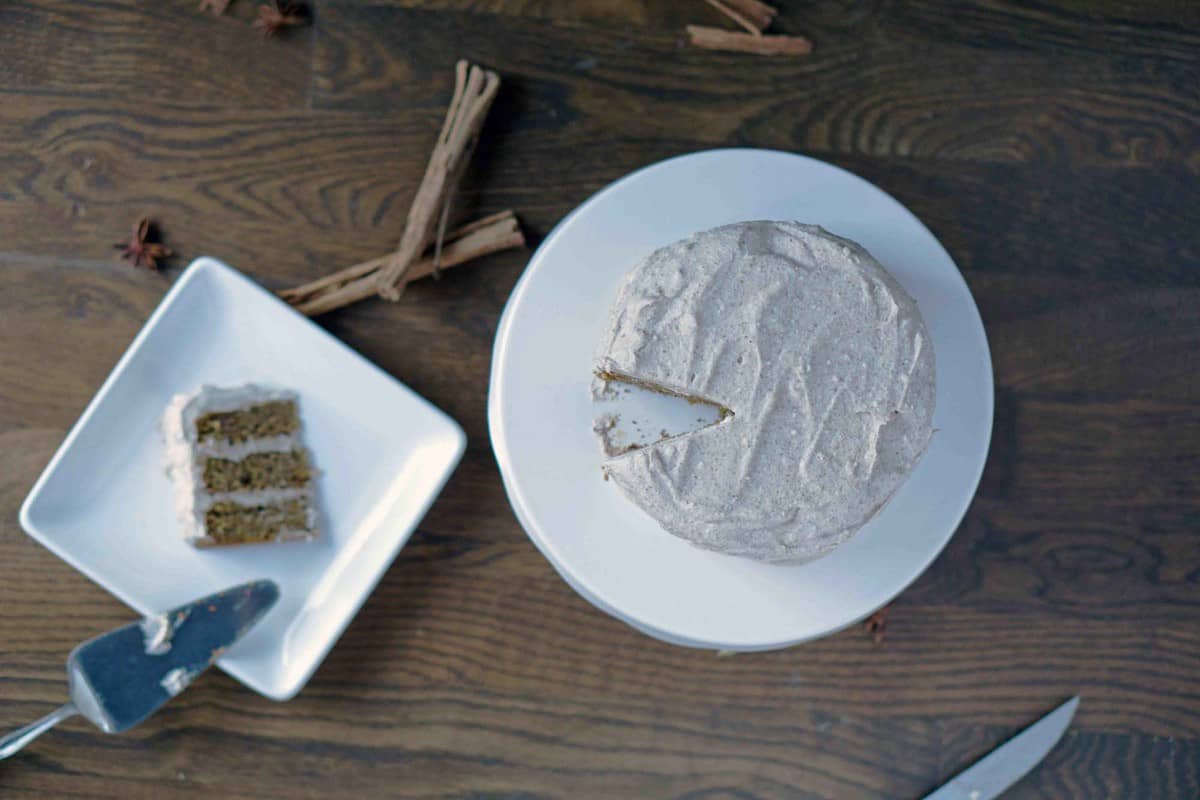 Cakes and cookies need less added sugar when the flours are naturally on the sweeter side. The combination of seeds and starches in this flour mix makes the cake fluffy, yet flavorful.

Fluffing the flours together in a food processor before mixing into the larger mix also helps lighten the cake. It also grinds the chia seeds into a flour.

This is grain free as well as gluten free recipe! Buckwheat, despite its confusing name, is actually a super-seed. It is not related to wheat and is not a grain.

Then I mix all of the flours together before I start mixing the wet ingredients. 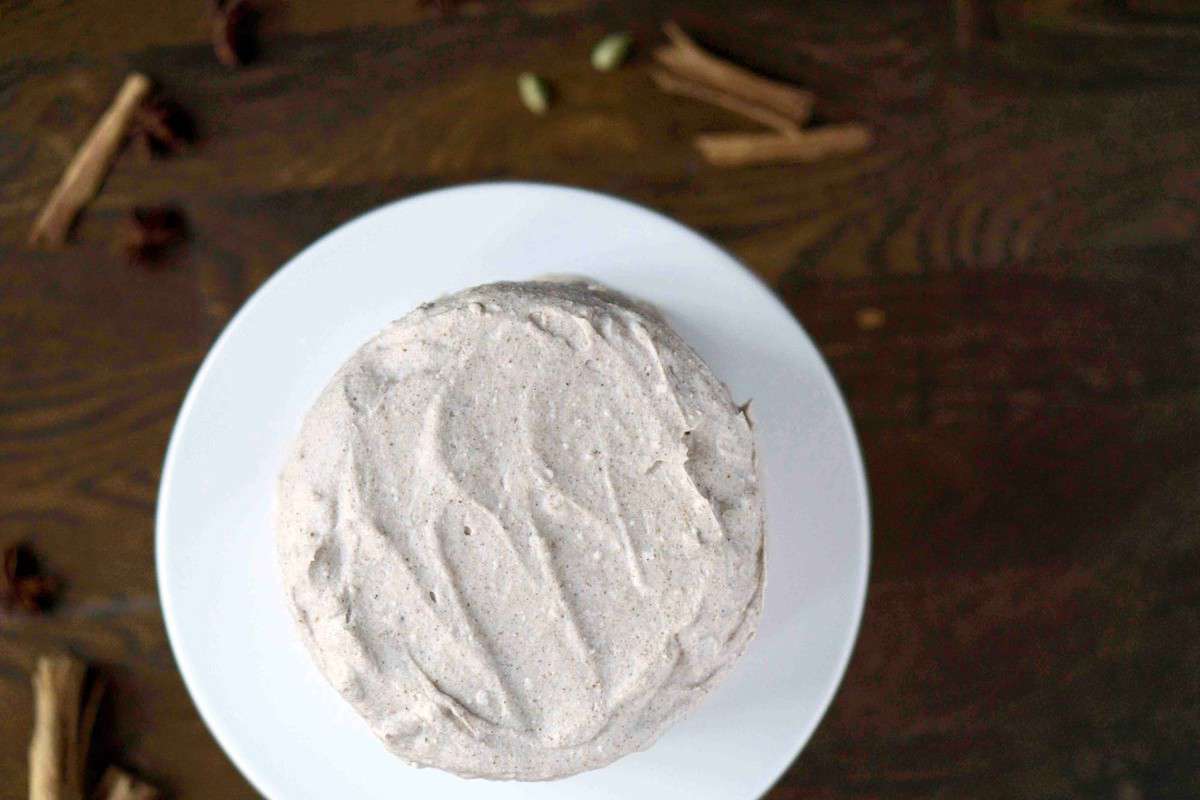 I use coconut whip cream in a lot of recipes! It's pretty simple to make.

You buy a can of coconut milk and let it separate by sitting undisturbed for a day or 2. Sometimes the cans are like this right from the store and sometimes you'll need to let them sit. They separate faster in the refrigerator.

Scoop the cream part of the coconut milk into a mixing bowl and whip until the consistency of whip cream. You can add some of the liquid coconut milk to the bowl to get the right consistency.

At this point its ready to add flavor. In this case a little maple and some autumn spices.

It's best to whip your coconut milk when the coconut milk is at room temperature. I usually just set it on the counter when I start making the cake and then it is ready by the time I'm ready to frost. 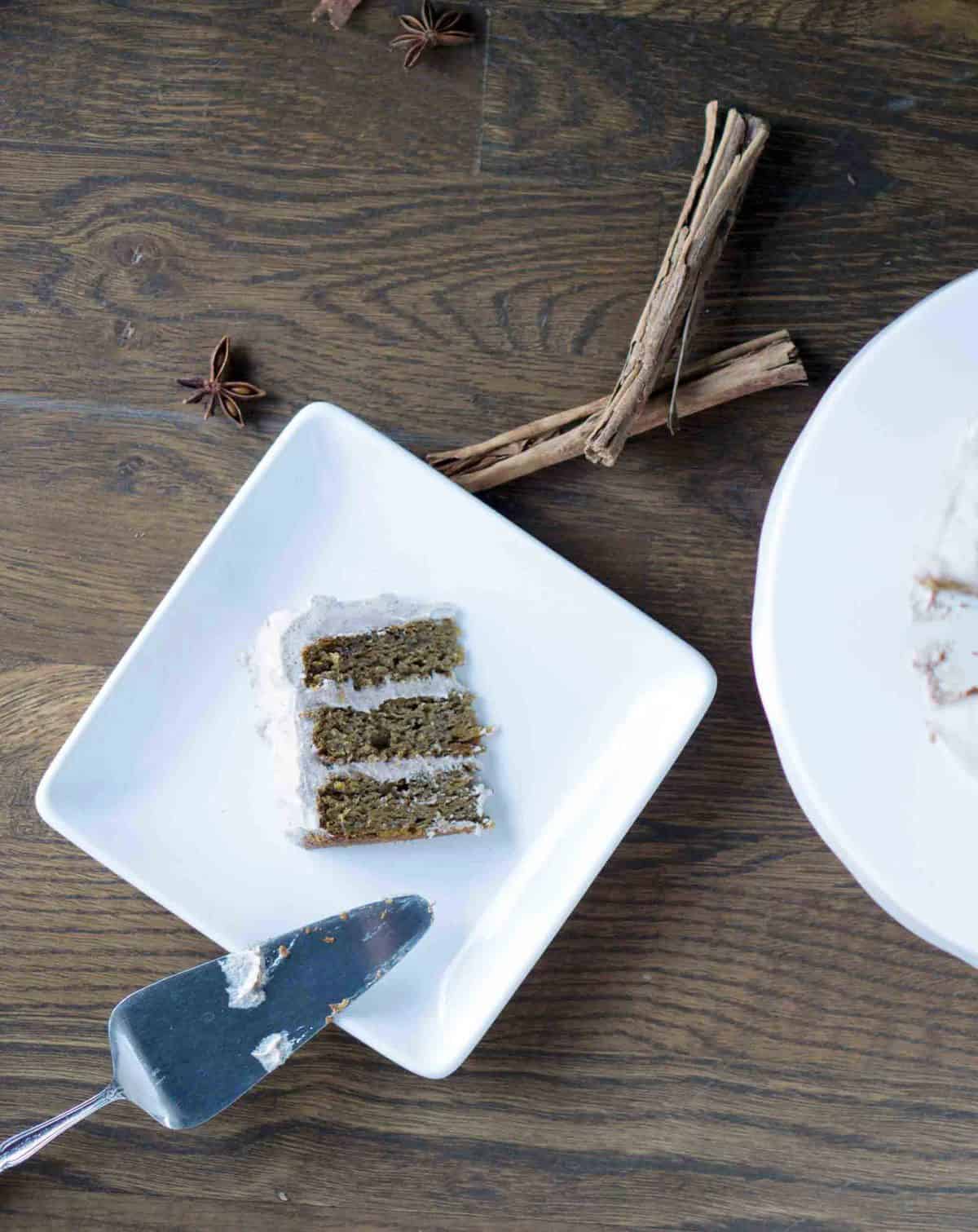 Making the cake ahead of time?

The cake does really well if you make it ahead of time. Like a good stew or bolognese, the spices meld and the flavor richens over time.

You can make the cakes up to 3 days ahead of time and store in the fridge.

Make the coconut whipped cream frosting the and frost up to 1 day before serving. 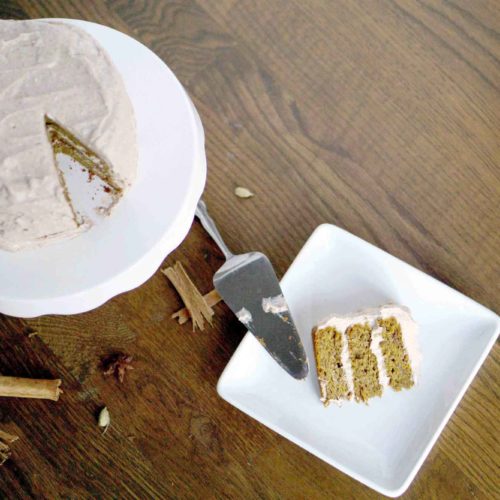