Have you ever planned the perfect outdoor barbecue, complete with homemade popsicles anticipating the July heat, only to be greeted by thunderstorms, gray skies and hail?

That was me... yesterday.

Turns out, popsicles are still delicious even if it's not 100 degrees. This week's frozen treat is extra exciting because it's part of #itsglurenfreepassiton's frozen treats theme! I've been digging rhubarb and coconut ice cream treats this month, so I brought the ingredients together in this healthy and refined-sugar-free creamy paleo rhubarb coconut popsicles recipe. Equally satisfying on a rainy or sunny day. 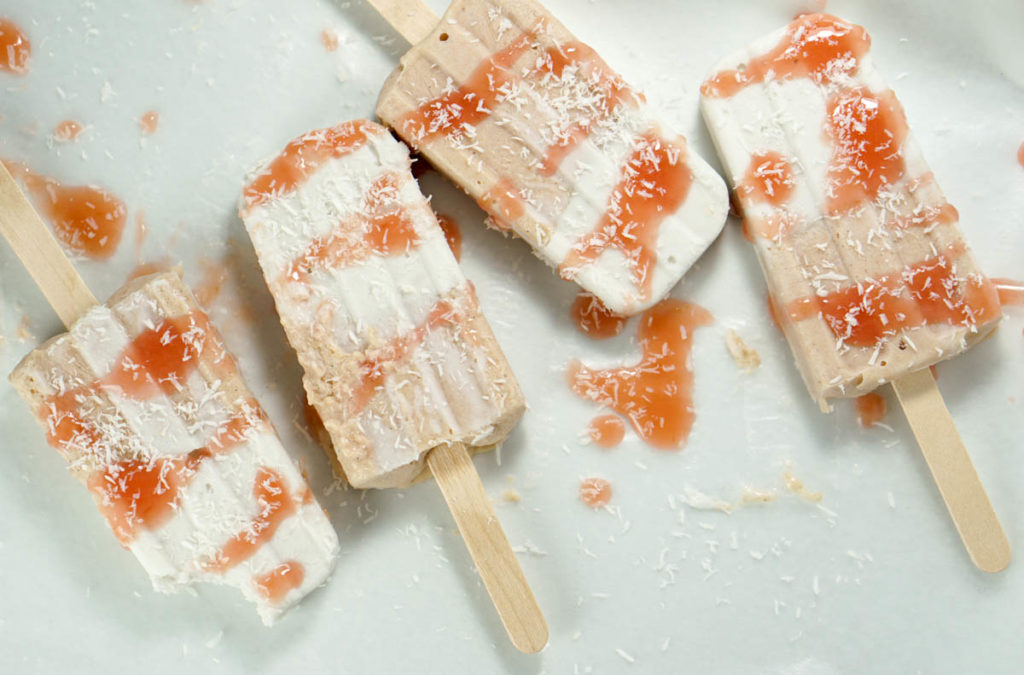 These popsicles are simple and plant-based. The only ingredients are rhubarb, apple, dates, vanilla, maple syrup, and coconut cream.

The combination is fruity, creamy, earthy and summery all at once with a hint of natural sweetness. This creamy paleo rhubarb coconut popsicles recipe will be a fun treat for your kids or your next BBQ and you don't even have to worry about sugar crashes, due to the natural sweeteners and overall low sugar count.

They also have plenty of fiber because we used real fruit, not fruit juice. How many popsicles can say that? 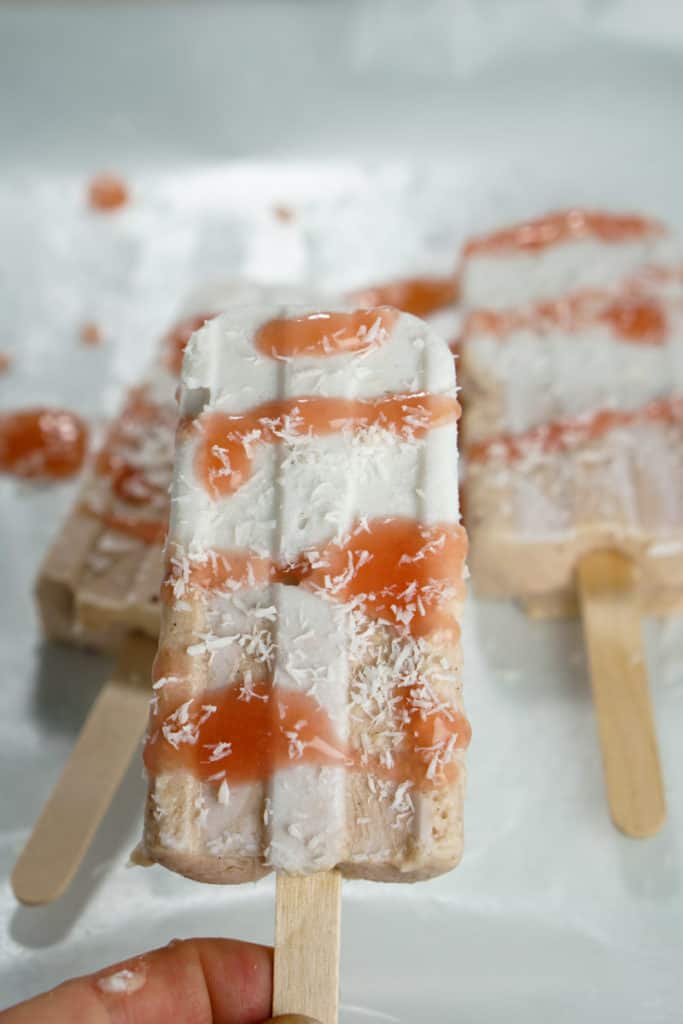 We layered them for more fun, though you could just mix all of the ingredients together to save time. The first layer of coconut cream, coconut water, vanilla and maple syrup is the top white layer. Its followed by the creamy rhubarb layer. 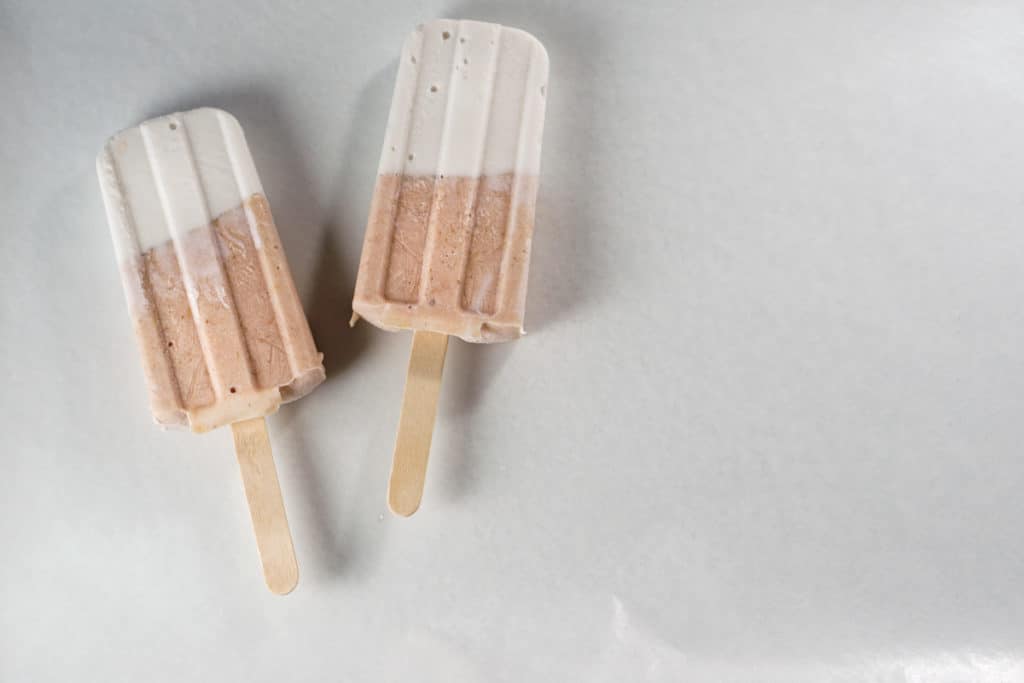 If you're looking for more coconut and rhubarb frozen treats to keep you cool this summer, try the coconut berry sundae with homemade peanut butter chocolate drizzle

or the delicious and elegant rhubarb cashew ice cream cake

And if you missed last month's #itsglutenfreepassiton then look back now. You won't want to miss the great recipes showcasing paleo flours. It's amazing how different recipes can be when you start with one common ingredient. You can see my recipe along with links to all the other paleo flour recipes in this single serving lemon almond cake with coconut cream.

It's Gluten Free, Pass it on! Frozen Treats

Look to the other great recipes from bloggers participating in this months #itsglutenfreepassiton frozen treats.

Enjoy the frozen treats and stay cool! Pin the recipe for later! 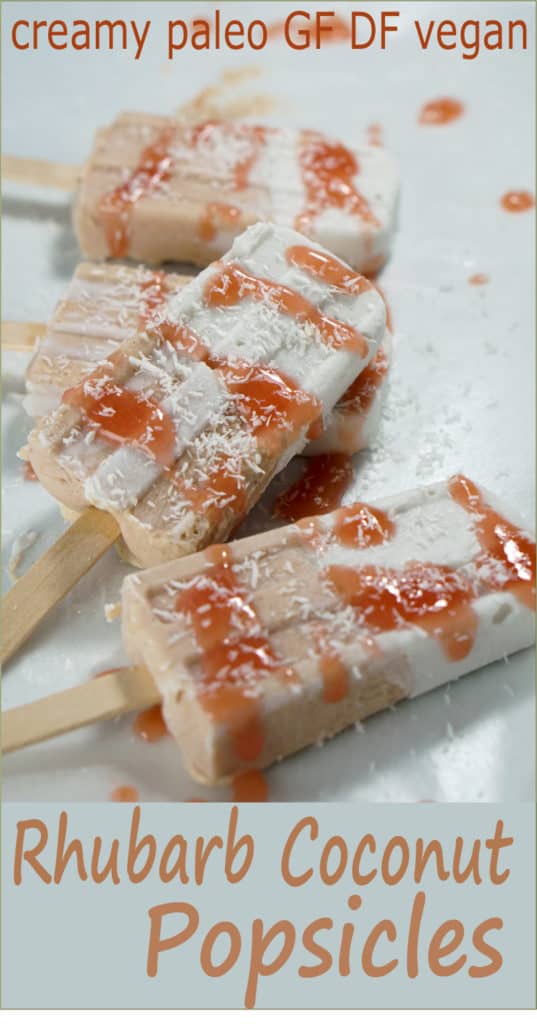 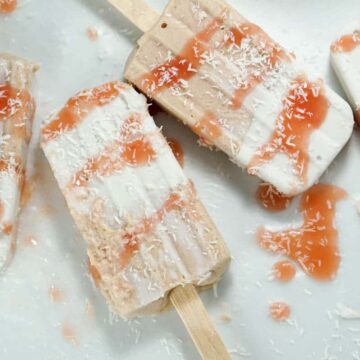 Tools: 10 serving popsicle mold Notes: layers are optional. To save time or create one consistently flavored pospicle, mix all ingredients together in food processor and fill popsicle molds before freezing.
Tried this Recipe? Tag me Today!Mention @EatYourWayClean or tag #EatYourWayClean!
Previous Post: « A Taco Run from San Diego to Tijuana
Next Post: Deconstructed Steak Taco on Curried Cauliflower Steak »